Windows PC users in Europe could get to pick their browser without going through Internet Explorer.

Microsoft is reported to have agreed to changes proposed by Opera Software to a ballot screen Redmond had offered for users to pick the browser they wanted on their Windows computer.

The ballot screen was offered by Microsoft to European regulators in July as a way to settle the anti-trust complaint brought by Opera. The browser maker complained Microsoft has abused its dominant market position by keeping rival browser makers off of Windows while carrying IE. 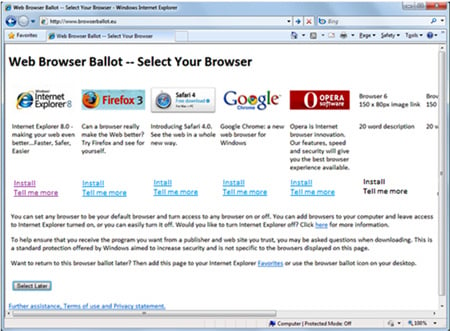 Microsoft offered a screen that would list five browsers determined by averaging monthly use-share date for the past six months. Once a browser was picked, an install link would have connected the user to the browser manufacturer's site to begin download, Microsoft said at the time.

Opera, though, raised objections to the ballot screen saying it shouldn't run inside IE - as proposed - and that browsers shouldn't be listed alphabetically. Instead, Opera wanted browsers to be listed randomly - something the screen shot of the proposed screen released by Microsoft appeared to already include. The ballot screen as unveiled by Microsoft would have listed IE first on the left-hand side of screen, followed by Firefox, Safari, Google's Chrome and then Opera.

Also, Opera objected to the continued use of the "e" IE icon, saying this would provide a natural bias towards Microsoft's browser because it's synonymous with Windows.

Bloomberg said computer users running Windows would now see a ballot screen that randomly lists the top five browsers that compete with IE. They'd then click on a browser's icon and the program would be downloaded.

Philip Lowe, director general of the commission's competition department, is reported to have said talks with Microsoft had finished and issues raised had been addressed. "We think we now have the basis for quite a robust remedy," Lowe said.