The Catholic League has fired a broadside against animal rights outfit PETA after the campaigning organisation decided to ask Playboy model and Dancing With The Stars contestant Joanna Krupa to whip off her kit in defence of homeless mutts: 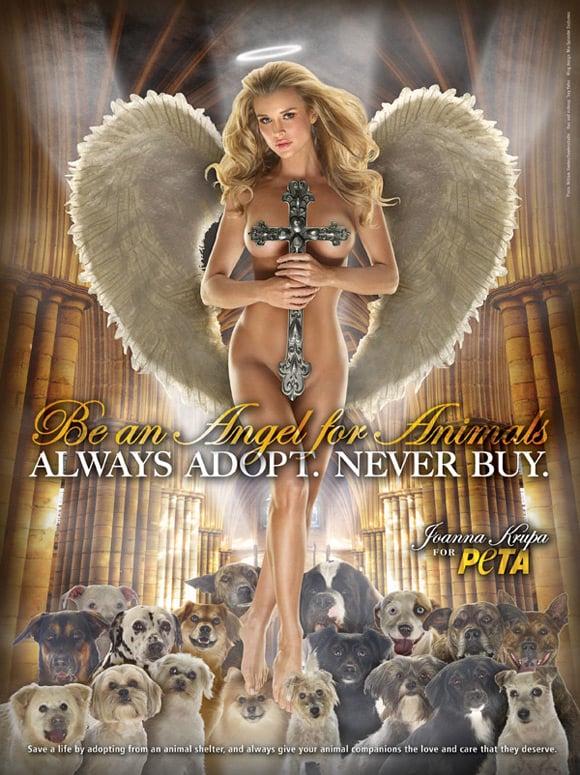 The image - which clearly demonstrates Krupa sports no fur whatsoever - is a follow-up to a Thanksgiving Be an Angel for Animals poster which featured the model "naked from the waist up holding a dog and a rosary".

Catholic League prez Bill Donohue let rip in a statement on Tuesday in which he accused PETA of "cheap irreligious scams". He claimed that PETA actully kills "95 per cent of the adoptable pets in its care" and that cats and dogs are "a lot safer in pet stores than they are in the hands of PETA employees".

He concluded: "PETA is a fraud. It also has a long and disgraceful record of exploiting Christian and Jewish themes to hawk its ugly services. Those who support this organization sorely need a reality check. They also need a course in Ethics 101."

Ms Krupa wasn't going to take this lying down, and retaliated: "As a practicing Catholic, I am shocked that the Catholic League is speaking out against my PETA ads, which I am very proud of. I'm doing what the Catholic Church should be doing, working to stop senseless suffering of animals, the most defenseless of God's creations." ®