Motorola's latest ad for its Droid smartphone could reveal the company's choice of target market: men insecure about their virility.

In fast-cutting music-video style, the "Pretty" ad shows the Jaws of Life tearing through sheet metal, a missile thrusting towards its target, and a bandanna-masked faux gang-banger pelting a metrosexual mannequin with paint balloons.

Possibly the most overtly Freudian image is that of a power saw obliterating a poor defenseless banana and splattering its juices into the ad viewer's face like...well...use you own fervid imagination.

All of this ultraviolence is accompanied by a manly man's voiceover that's worthy of being quoted in its entirety, to wit:

Should a phone be pretty?
Should it be a tiara-wearing digitally clueless beauty-pageant queen?
Or should it be fast?
Race-horse-duct-taped-to-a-scud missile fast?
We say the latter.
So we built the phone that does.
Does rip through the web like a circular saw through a ripe banana.
Is it a precious porcelain figurine of a phone?
In truth, no.
It's not a princess.
It's a robot.
A phone that trades hairdo for can-do.

If there's even the slightest doubt of the identity of the aforementioned "tiara-wearing digitally clueless beauty-pageant queen," that uncertainty is dispelled by the ad's opening image, which mimics the cylindrical lucite case in which the original iPhone was displayed at its coming-out party in January 2007 - a mockery certainly not lost on the attentive Apple fanboi. 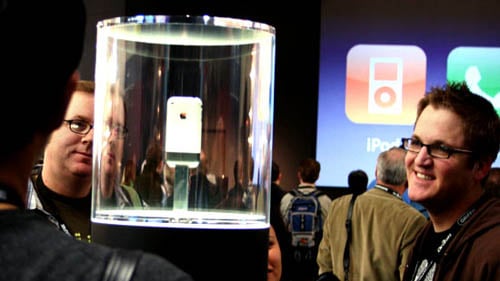 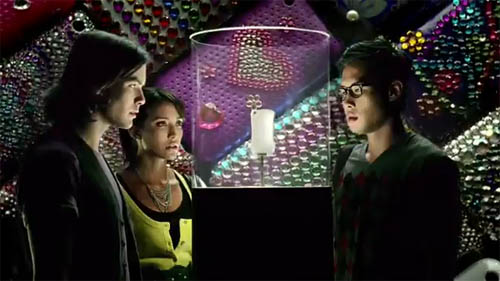 Moto's testosterone-fueled smash 'em, bash 'em ad blitz appears to be working - among half the population, at least. According to a recent report in Engadget, the BrandIndex trend watch compiled by the brand trackers at YouGuv shows that men 18 and over are taking Moto's macho message to heart - or, maybe, to some other portion of their anatomy. As Apple's share of masculine brand loyalty is sinking, Moto's is rising.

But the campaign is clearly a gamble. The "Pretty" ad takes potent potshots not only at metrosexuality - and, it takes little image-decoding to determine, homosexuality as well - but also at women. Enticing half of one's market with strong imagery is one thing, but insulting an equally broad swath of the check-writing public is dicey at best.

It's not immediately clear why Motorola has chosen to paint itself into such a tight corner. Reviews of the Droid have been mixed, but generally favorable. Although greybeard Stewart Alsop may have branded it as "truly terrible", the majority of the punditocracy have sided with either PC Magazine, which called it a "powerful new competitor" to the iPhone, or Ars Technica, which in its typically exhaustive manner took six pages to decide that the Droid is "good enough".

But maybe we at The Reg are over-analyzing what is, after all, merely 30 seconds of "made you look." Watch the full ad, and decide for yourself:

Even after repeated viewings, that banana burst still makes us feel a wee bit uncomfortable. Maybe buying a Droid would make us feel more secure. ®