Review You can argue until the cows come home about what is the minimum screen size a PMP can get away with for watching feature length video on. Most would agree that an iPod Touch-esque 3.5in is the sweet spot, but Samsung reckons there is room beneath that. 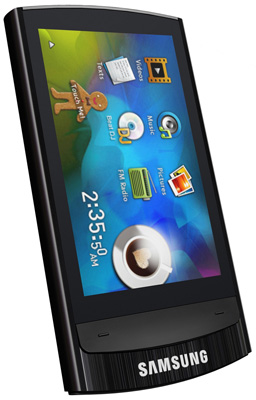 To all intents and purposes the new YP-R1 is a half pint version of the YP-P3 with which it shares the, now familiar, Samsung widget and icon based TouchWiz touchscreen UI. The main difference is screen size. While the P3 has a 480 x 262 resolution 3in affair, the R1 makes do with 2.6in screen at 400 x 220.

The drop in screen size has allowed Samsung to make the R1 quite a bit smaller than the P3. In fact at 85.2 x 45.5 x 8.9mm and weighing only 50g, it’s just about the smallest PMP we have come across with pretensions to serious video playback.

Furthermore, the reduced screen size hasn't put the kibosh on the touchscreen UI, because the capacitive screen is one of the best we have come across on a Samsung device of any size, shape or type and is a major step forward from the P2 and P3.

In fact, the UI is near enough perfect. It's accurate, fluid, responsive and quick and this makes the well thought out menu system and cover-flow style album and video selection screens a joy to use.

External controls are limited to two buttons for volume. These are located below the screen – or to the right of the screen to be more accurate. Like the Philips Muse the sighting of the physical controls suggest the device should be held portrait rather than landscape. On the R1 the feeling is reinforced by the orientation of the maker’s name.