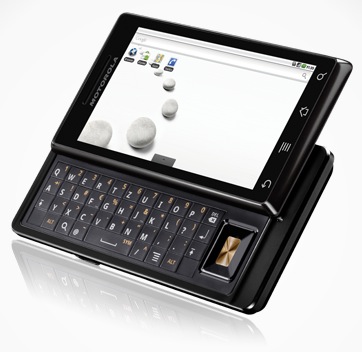 Online retailer Expansys has secured the exclusive rights to sell Moto's highly anticipated Milestone handset - it's called Droid in the States - before the likes of O2 or Orange.

Admittedly, Expansys' deal with Motorola only lasts until the end of this month. It's unclear which network operator(s) will win Milestone rights next year, but Expansys is offering the handset for £50 ($81/€55) when you sign up for a £35 monthly contract with T-Mobile.

Punters can't - for the time being - buy the phone from UK T-Mobile stores, an Expansys spokesperson confirmed to Register Hardware.

Though only based on a 550MHz processor, the Milestone offers a 3.7in touchscreen display and has a slide-out Qwerty keyboard. The phone's screen offers haptic feedback, Expansys said.

All the mainstream connectivity options are supported on Milestone, including 802.11b/g Wi-Fi, HSDPA 3G at up to 10.7Mb/s and quad-band GSM/GPRS.

Motorola has fitted Milestone with a 5Mp camera with image stabilisation, auto-focus, a dual-LED flash and 4x digital zoom. Pictures are stored on Micro SD memory cards of up to 32GB and can be wirelessly sent to other phones over Bluetooth 2.1.

Milestone's other notable features include a voice search feature that lets you "find anything on the web or on your phone", according to Expansys, and the optional Multimedia Station - a hi-tech docking station.