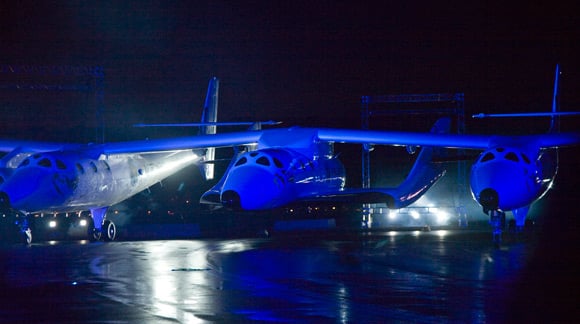 SS2 rolled out slung under the WhiteKnightTwo mothership, which will eventually carry it aloft to 50,000ft before the pair part company and a hybrid rocket engine blasts six SS2 passengers and two astronaut pilots on their sub-orbital joyride.

Virgin Galactic founder Richard Branson enthused: “This is truly a momentous day. The team has created not only a world first but also a work of art. The unveil of SS2 takes the Virgin Galactic vision to the next level and continues to provide tangible evidence that this ambitious project is not only moving rapidly, but also making tremendous progress towards our goal of safe commercial operation.”

Governator Arnold Schwarzenegger was on hand to christen SS2 the "Virgin Space Ship (VSS) Enterprise" - something which is "not only an acknowledgement to that name’s honorable past but also looks to the future of the role of private enterprise in the development of the exploration, industrialisation and human habitation of space".

Before Branson sets about conquering the galaxy, SS2 will have to earn its "all required US government licensing" wings. Virgin Galactic says the design will be "refined and completed during an extensive test flying program to commence shortly". 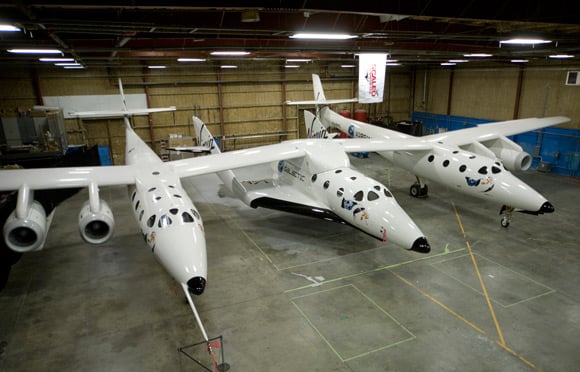 Scaled Composites, which constructs both the SS2 and WhiteKnightTwo vehicles, will doubtless be hoping the former behaves itself during testing. The WhiteKnightTwo, aka VMS (Virgin Mothership) Eve, suffered a tail strike during a touch-and-go manoeuvre earliert this year, which prompted much press speculation about control issues.

*You've got to give Branson his due - he knows how to throw a spaceship party. Virgin Galactic's preview press release explained:

SpaceShipTwo will be unveiled after darkness has fallen over the Mojave Desert to the sound of a space-themed anthem from Britain’s biggest DJs, Above & Beyond. Fittingly titled “Buzz” the track will sample Buzz Aldrin’s original moon landing dialogue. Following the naming by Governors Richardson and Schwarzenegger, the DJs will also perform an exclusive set at the celebration cocktail party which will follow and feature the first ever IceBar in the desert hosted by Absolut and the world famous Swedish IceHotel. All the guests will be protected from the desert cold by designer space jackets supplied by PUMA.