AT&T to choke your iPhone

AT&T has finally figured out how to fix its much-maligned US mobile data services: stop users from eating up so frickin' much bandwidth.

As reported by the Associated Press, president and CEO of AT&T Mobility Ralph de la "Darth" Vega told attendees at a New York investors' conference on Wednesday that his company plans to force data-plan subscribers to "reduce or modify their usage."

In Darth's world, consumers are dumb and selfish data-piggies. "We've got to get them to understand what represents a megabyte of data," he said.

We're not all sinners in his eyes, however: only three per cent of smartphone users eat up 40 per cent of AT&T's capacity, he said, adding that the hungriest online swine are concentrated in San Francisco and New York.

Hmm...The capital of tech-savvy Silicon Bay Area, and the center of US media. No worries about offending those constituencies, eh?

As part of his high-minded educational effort, AT&T's connectivity Cassandra pointed out that - whodathunkit? - video and audio streaming account for most of that bandwidth hogging. Note to Pandora, Last.fm, and Shoutcast, and oh-so-many others: Darth is planning to swing his bandwidth-slicing lightsaber directly at your revenue streams.

But the freewheeling, freeloading, free-bandwidth days are numbered. Although he didn't assign a date to when the data hammer will drop, Darth did say that bandwidth metering and usage-based pricing is inescapable.

Right now, however, AT&T doesn't make it easy - no, make that "possible" - for its subscribers to monitor their bandwidth suckage even if they do know what a megabyte is.

But that will soon change. "We're improving all our systems," said the Mobility man, "to let consumers get real-time information on their data usage."

AT&T has also launched another subscriber-based effort to improve its service - an iPhone app, Mark the Spot (App Store link), that allows disgruntled users to send reports directly to Big Phone when their service is spotty or nonexistent. 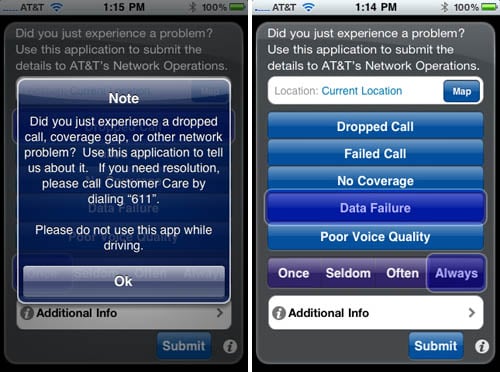 Exactly how the free app is supposed to send a resounding FAIL to AT&T when the network is too clogged to be used is uncertain - although the app does include a map-based interface to pinpoint problem areas, then to complain as soon as you find a decent connection.

But perhaps we're being a bit too harsh on Darth and his crew. After all, Mark the Spot is at least an acknowledgement that AT&T's service is woeful. And the company has said that it's working to improve service in some selected cities - including our bandwidth hogging hometown of San Francisco. No hard news yet, however, on improvements in New York, where AT&T admits that up to one-third of all calls are likely to be dropped.

One thing is certain, however: don't expect bandwidth-hungry internet tethering to be available for your AT&T iPhone anytime soon. And odds are that when it does arrive, it will be neither free nor unlimited. ®