Google has teamed up with venerable US newspapers The New York Times and The Washington Post to create an experimental web-based news platform designed to exploit "certain unique advantages of online publishing."

Dubbed Living Stories, the prototype was unveiled on Tuesday with a post to the Official Google Blog. "We believe it's just as important to experiment with how news organizations can take advantage of the web to tell stories in new ways — ways that simply aren't possible offline," is the word from software engineer Neha Singha and senior business product manager Josh Cohen.

The platform puts ongoing coverage of a particular story on a single page with a single URL, and this page gets updated as new articles are written. "[Living Stories] organize information by developments in the story. They call your attention to changes in the story since you last viewed it so you can easily find the new material. Through a succinct summary of the whole story and regular updates, they offer a different online approach to balancing the overview with depth and context," the post continues.

Certainly, this sort of thing isn't possible offline. But it's hardly revolutionary. A "living story" looks a lot like a web page filled with links news articles, summaries, and a timeline or two: 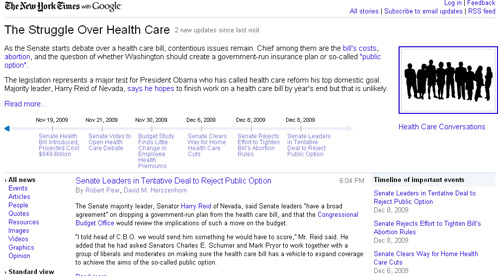 But it tells you what's changed since the last time you visited. And, yes, it's just a prototype. "Over the coming months, we'll refine Living Stories based on your feedback," the post continues. "At the very least, we hope this collaboration [with The Times and The Post will kick off debate and encourage innovation in how people interact with news online."

The idea to make the platform available not only to The Times and The Post but to any other interested publisher. Newspapers would host "living stories" on their own sites.

The platform is yet another small bone Google has thrown to the world's newspapers, which have struggled to fund themselves while watching Google rake in their ad dough using links to their content. Apparently, Living Stories is a way of boosting traffic to papers like The Times and The Post.

According to The Post itself: "By grouping the stories day after day under one Web address, the Times and Post could boost their Google rankings, which would tend to push those pages toward the top of the list when people search for that subject."

If we take this at face value, it would seem that Google, The Times, and The Post could save themselves an awful lot of trouble if Mountain View just agreed to boost the papers' ranking without spending so much time on this semi-interesting prototype. But even if the papers' rankings go up, this will hardly solve the problem. The Times and The Post aren't hurting for traffic, they're hurting for money. A bona fide news organization is an expensive thing, and there are only so many ad dollars to go around.

In May, Susan Waxman - a former correspondent with The Times and The Post - told the world that Eric Schmidt and Google were developing some sort of premium news service. But Living Stories is a far cry from the Waxman's alleged service - a "system that will bring high-quality news content to users without them actively looking for it." ®