Scientists at the colossal subterranean ATLAS instrument cavern, located on the 27-km underground orbital motorway for hadrons that is the LHC, observed the new record-breaking event at 21:40 Swiss time last night. 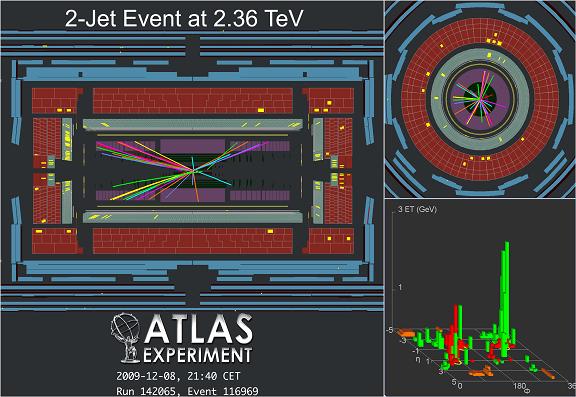 Hadrons hitting one another head-on at light speed deep beneath Switzerland. Now I can retire as a caption writer.

The machine had already achieved the world's highest beam energies at 1.18 TeV in each - leaving the rival US Tevatron in its dust.

The LHC is designed and constructed to ultimately achieve collision energies of up to 14 TeV. However technical problems in the unique machine's design were unmasked during its initial fire-up last year, when an electrical connection blew and ruptured a superfluid helium pipe above it. The resulting explosion of sub-lambda-point gas cascaded along hundreds of metres of magnetic vacuum conduit, crippling the great machine for months as complex repairs were carried out.

Atomsmasher engineers are now confident that no such mishaps will occur provided that the LHC is not cranked up beyond beam energies of 3.5 TeV, for a maximum collision energy of 7 TeV. Even these relatively cautious operations are not set to begin in earnest until next year, when it is hoped that huge numbers of incredibly violent collisions will see hadrons ripped apart to scatter exotic, never-before-seen sub-particulate debris into instruments such as the ATLAS.

The draft LHC programme had shown nothing but 450 GeV collisions planned for the next few days, with 2+ TeV tentatively pencilled in for Friday night. However, once again the boffins of CERN have shrugged off recent technical hiccups to achieve a major milestone well ahead of schedule.

The various tinfoil-chapeau'd LHC doom prophets, who believe that the mighty experiment is sure to destroy the world and/or universe in some kind of black-hole blunder, runaway conceptual custardisation process, "collaptical explosion" etc, will no doubt be hugely frustrated today. Yet again, the promised apocalypse has failed to materialise.

Those laymen who follow quality science analysis, meanwhile, are well aware that the LHC is not in fact a doomsday machine - but it does have the potential to create a portal from our humdrum 4D space-time to some as yet unknown extradimensional continuum*. It has been theorised in some quarters that in fact the continual technical setbacks suffered by the LHC have resulted from sabotage by operatives of some extra-dimensional agency - perhaps a pan-continuum police force seeking to prevent humanity achieving interdimensional travel before we're ready for it.

The possible dimensional intercops will no doubt be fuming alongside the tinfoilers today at having a march stolen on them by crafty LHC physicists. ®

*Albeit one so tiny and shortlived as to be pretty much useless in terms of colourful continuum-travel, portal invasion etc. But you have to start somewhere.

Thanks as ever to Reg reader Chris Stephens and the gang at the LHC Portal for the tip.

On-Call Even with instructions staring them in the face, this genius couldn't get it right
Software27 Jan 2023 | 44

Welcome to the real world, kids. And for the rest of us, a future at which Meta is gulp! – better at large-scale analytics
Databases27 Jan 2023 | 8