Play games wherever, whenever

Stick "extreme" in front of another word and you have a surefire YouTube hit. Epson hopes to power past such greats as extreme ironing and extreme crocheting with... extreme gaming.

The term has no official definition - yet - but to Epson it means donning a suit fitted with cables, power pack, PlayStation 3 - the slim one, of course - and an Epson projector so that you can play videogames wherever you want.

Epson has released a video of its own extreme gamer furiously tapping buttons in such weird spots as London's Carnaby Street and the side of a pub wall, and while engaging in activities like abseiling down a high rise building and dancing away during a late-night disco session.

Can't see the video? Then download Flash Player from Adobe.com 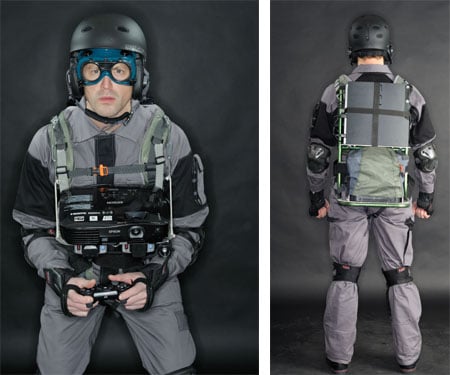 The geek wears an Epson projector on his front, with slimline PS3 and powerpack on his rear

The sport - if you can call it that - probably won't make the 2012 Olympics. Though it does illustrate just how far Epson will go to promote its projectors. It was the EH-TW450, by the way. ®