We at The Register would like to take a moment to formally denounce the media's despicable smear job of US golfer Tiger Woods over malicious and unproven claims that he cheated on his wife with — at last count — every single able-bodied cocktail waitress living in the Northern Hemisphere today.

What right does does the media have to drag Woods' near-spotless public reputation through the mud? And what right does the public have to humiliate this sterling golfer and prince of sport over deeply private "transgressions" that occur millions of times a day to non-celebrities.

For what? Cheap laughs and snarky comments?

But then it dawned on us there's a tech angle to the whole Tiger Woods clusterfuck. We also soon realized the initial repulsion we were feeling towards his treatment wasn't an unprecedented tug of human decency and compassion, but merely a normal simmering of jealousy that others in the media were grabbing all the cheap laughs while the getting was still good. And so we choose to reach for the stars:

Any sap caught in an airport in recent years has probably seen posters of Tiger Woods flogging for the global technology services and outsourcing company, Accenture. Or perhaps you mistook the advertisement for Woods selling Gillette, Gatorade, Pepsi, Proctor and Gamble, Nike, Electronic Arts, AT&T, Upper Deck, TLC Laser Eye Centers, NetJets, or Tag Heurer's watches. The dude pretty much has a lot of things going on.

Commercials featuring Tiger began disappearing from prime time shortly after the golfer's auto accident in his Iseworth neighborhood and the ensuing flood of tabloid reports of alleged infidelity. In addition, Woods' refusal to address these rumors publicly has only focused more attention on the event.

Although many sponsors have vowed to stand by Woods through the controversy, Accenture has thus far remained silent on its plans. The company uses Woods' image prominently as its "world symbol of ultimate high performance." The company did not respond to our inquiry, but we suspect there are few ads the company should probably drop in light of recent events.

These print ads are from Accenture's advertisement page, which has mysteriously disappeared from the website: 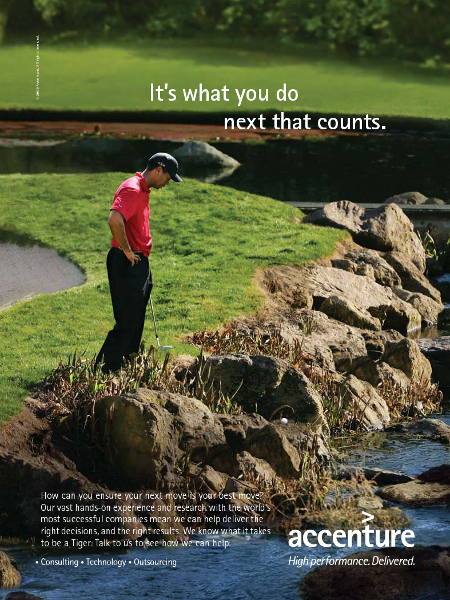 Doing nothing has been proven inadvisable — ho ho ho. 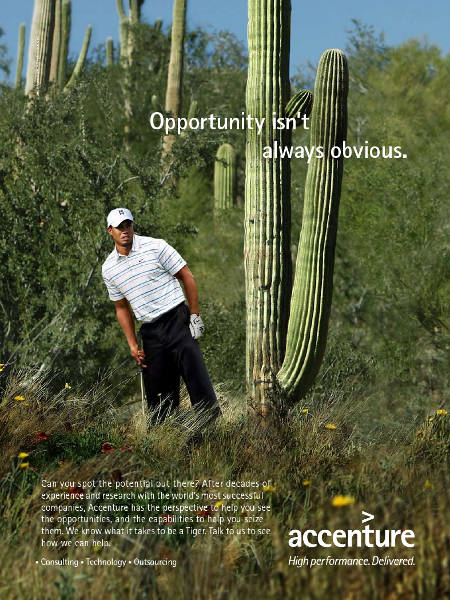 Sometime you need to wake up early to get laid — ha ha ha. 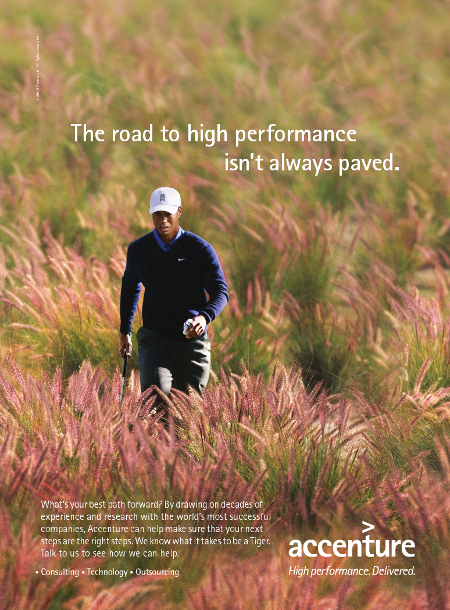 The injunction issued Thursday notably blocks the media from even revealing details of the order itself. And because we're based in the UK, we are not allowed to say what exactly has been barred.

Our hands are tied. Google it or something. ®

Hyatt says hackers took card data from 250 of its hotels

'Protecting customer info is critically important,' says company that got pwned in 50 countries

Updated How many customers' deets? It's not saying just yet

One of, but not the worst, in history