Stargazers at the US's University of Rochester have announced that Mizar in the asterism of the Plough (the Big Dipper to our US cousins) is actually a six-star system.

Mizar was scientifically confirmed as the first known binary star system back in 1617, by Benedetto Castelli and Galileo, who demonstrated that Mizar was linked to Alcor (see pic).

Mizar itself was then discovered to be made up of Mizar A and B - the first binary system to be photographed through a telescope in 1857. Mizar A was revealed in 1890 to be a binary, the first such discovery made by spectroscopy. The same technique showed in 1908 that Mizar B was also a pair of stars, marking the first known quintuple system. 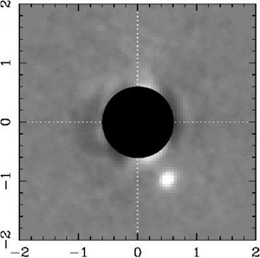 However, there was some doubt as to whether Alcor really did form part of this gravitationally-bound system, with scientists suspecting it was simply a "optical binary". It's now been shown that Alcor is indeed part of the Mizar group and in fact is also a binary, sharing space with Alcor B (pictured).

The revelation comes courtesy of Eric Mamajek, assistant professor of physics and astronomy, who headed the team which inadvertently made the discovery using the Multiple Mirror Telescope in Arizona while hunting for exoplanets.

The 'scope has "a secondary mirror capable of flexing slightly to compensate for the twinkling the Earth's atmosphere normally imparts to starlight", and Mamajek and colleagues subjected captured images of stars to a computer algorithm to "remove as much glare as possible from the image of a star in the hopes of spotting a planet".

Mamajek explained: "Finding that Alcor had a stellar companion was a bit of serendipity. We were trying a new method of planet hunting and instead of finding a planet orbiting Alcor, we found a star."

A rough spectrum of the star has revealed it to be "a cool and dim M-class dwarf" whose presence partially explains Alcor's previously-observed "unexpected motion". Mamajek also insists the new observation confirms Alcor is gravitationally connected to the Mizar group.

He enthused: "It's pretty exciting to have found a companion to this particular star. Alcor and Mizar weren't just the first known binaries - the four stars that were once thought to be the single Mizar were discovered in lots of 'firsts' throughout history."

Mamjek provocatively concluded: "You see how the disk of Alcor B doesn't seem perfectly round? Some of us have a feeling that Alcor might actually have another surprise in store for us." ®