'Without them, IT will gobble entire world power supply'

Boffins in Switzerland have warned that increasingly powerful computer processors are set to guzzle the entire world electricity supply by the year 2100. They say that only 3D myria-core chips can save the day. 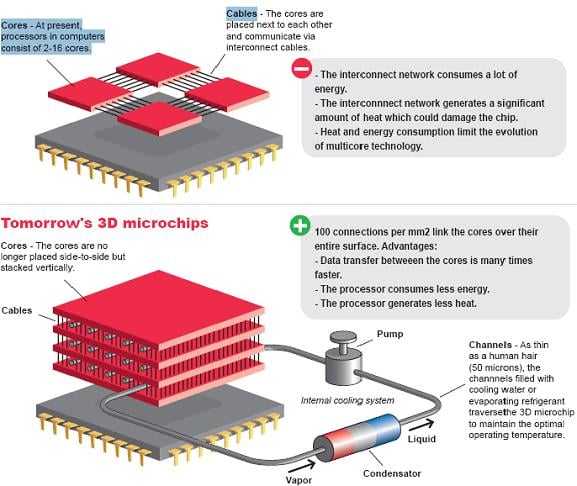 Getting on top of Moore's law.

"As consumption doubles over a five-year period, the supercomputers of 2100 would theoretically use up the whole of the electrical supply!”

According to Thome, the answer is to expand on today's multicore processors by building three-dimensional arrays of cores - rather than just laying them out on a sheet. Boffins at the EPFL have allied with others at the Eidgenössische Technische Hochschule in Zürich (ETH Zurich) and from IBM's Swiss lab at Rüschlikon to conduct the CMOSAIC project, which is aimed at delivering processors with as many transistors per cm3 as there are neurons in the human brain. IBM has just come on board the Swiss government-funded effort.

According to Thome and his colleagues, 3D processors will be much more energy-efficient than ordinary flat ones, so bowling out the issue of using up all the world's power supplies. But they'll still heat up - and air cooling won't be good enough.

The boffins plan to build their 3D devices with a network of 50-micron cooling pipes running through them, about the thickness of a human hair. The pipes will carry liquid coolant, which will be heated into a vapour by the hot cores. It will then be condensed, cooled and recirculated.

The assembled Swiss boffins expect to see their first 3D integrated circuitry going into supercomputers around 2015, and the first ones fitted with the new liquid-chill gear in 2020.