NASA's Wide-field Infrared Survey Explorer, aka WISE, is up and running following a successful launch at 14:09 GMT today from Vandenberg Air Force Base in California. 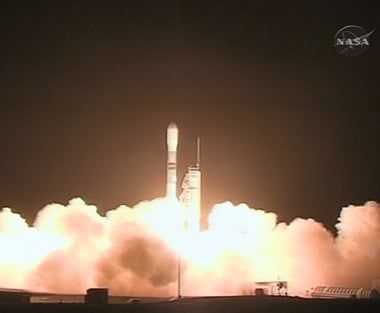 The 661kg spacecraft was lifted aloft by a Delta II rocket, following a launch knock-back last week caused by an "anomaly in the motion of a booster steering engine".

Shortly after separation from the rocket, WISE sent back its first signals to ground controllers and appears to be in good shape.

Over six months, WISE will operate at an altitude of 525km, passing over the poles 15 times a day and snapping every 11 seconds through its 40-cm (16-inch) telescope to eventually capture around 1,500,000 images of the entire sky in the infrared "with a sensitivity hundreds of times greater than ever before".

NASA's summary explains that the mission will "uncover objects never seen before", including brown dwarfs, ultraluminous infrared galaxies and "disks of planetary debris around young stars".

The spacecraft is also tasked with detecting "near-Earth objects, both asteroids and comets, with orbits that come close to crossing Earth's path". NASA expects to find "hundreds" of these bodies, and the catalogue will enable an estimate of "approximately how often Earth can expect an encounter with a potentially hazardous asteroid".