Nexus One launch date outed too

Following Google’s recent confirmation that it will sell a branded Android smartphone, the upcoming device’s possible specifications and launch date have emerged. 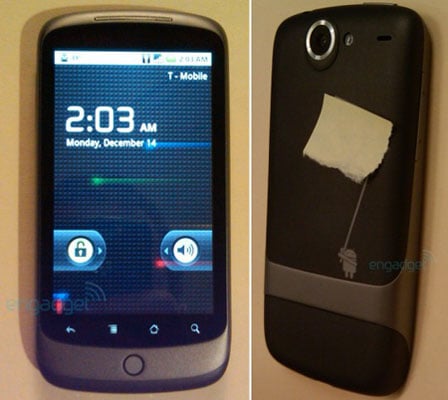 A source on website These Are The Droids (TATD) has claimed that by rifling through “library files and various other system files" in the recently leaked Android 2.1 Nexus One - widely thought to be the phone's official name - ROM, references to “Snapdragon Specific Libraries” and related Qualcomm files were discovered.

The implication is that Nexus One will run a Snapdragon processor, such as the 1GHz version inside HTC’s upcoming Hero 2 smartphone. HTC, let’s not forget, is the hardware manufacturer behind Nexus One.

Nexus One will also feature distance proximity sensor with ambient light sensor – if you believe the source’s discovery of a Capella CM3602 reference within the phone’s Android 2.1 ROM. Mentions of a Bosch BMA150 accelerometer and magnetic compass were also supposedly uncovered.

Broadcom’s 802.11n Wi-Fi radio - featuring Bluetooth 2.1 and FM signal support – and reference to a noise-cancelling chip, the latter within “libaudio.so”, were also supposedly found by the website’s source.