This could be good news for humanity, as atmospheric soot levels would be much easier to reduce. Filtering soot out of exhausts from diesel engines and coal burners is simple compared to removing and sequestering CO2, and as an added benefit the effects would be rapid: soot doesn't persist in the atmosphere for long periods the way greenhouse gases do, as it is washed out by rain or snow. However, many environmental campaigners would resist the idea of soot taking centre stage, fearing that this could lead to a reduced emphasis on greenhouse-gas emissions reductions. 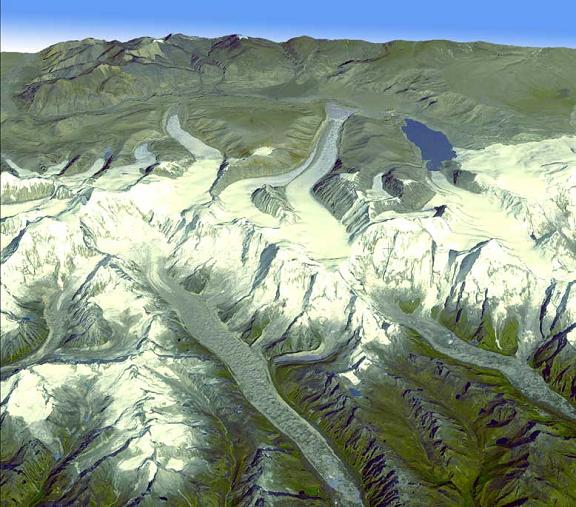 Ice running off the gutters of the 'roof of the world'.

Earlier investigations including the effect of soot had focused on the Arctic, where Goddard scientists have previously suggested that "the impact of aerosols is just as strong as that of the greenhouse gases". Aerosols include soot, which tends to heat the atmosphere, plus sulphates and others which cool it. Unfortunately sulphates also cause acid rain, and clean-air regs in the US and Europe have seen them massively reduced - and the Arctic warm up.

Now, Goddard researchers have carried out new investigations into the effects of sooty aerosols on the glaciers of the Himalayas - sometimes known as the planet's "Third Pole". Glacial melting in the Himalayas has received a lot of play in the greenly-inclined media lately against the background of the COP15 international climate talks underway in Copenhagen; it is widely felt that the mountain ice is disappearing much faster even than CO2-alarmist climate models predict, and that this is a reason to suggest that the Copenhagen talks - focused entirely on greenhouse-gas emissions - may be the last chance for humanity to save itself from a disastrous climate apocalypse.

Next page: Forget about burping cows, airliners and green IT - just tune up your diesel engine and chip in towards modern stoves for everyone
Page: