Flexible plastic computer displays have come closer as a result of a successful organic flash memory project led by University of Tokyo researchers.

Flexible flash memory could be used in other relatively large area applications, such as pressure sensors, actuators and electric ink book readers. This contrasts with NAND or NOR flash, which is used in physically small areas. The flexible flash display material has to withstand bending and the Tokyo researchers' material can deform up to a 6mm curve radius without its working being affected. 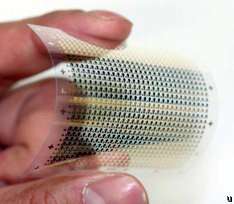 An organic flash memory transistor (OFMT) has two main components: a conducting floating gate which is wholly enclosed by an insulating gate dielectric material. It is layered onto a substrate material. The Tokyo-led researchers used a plastic sheet substrate made of a PEN (polyethylene naphthalate) resin sheet, on which they built a 676 cell (26 by 26) array. The PEN sheet was not melted by the floating gate production process, which has been a problem for other organic flash memory projects. 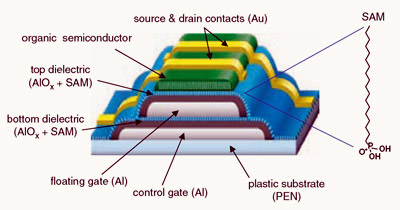 The dielectric is formed of two layers; a self-assembling monolayer (SAM), about 2nm thick, built from phosphoric acid with an alkyl chain, described as n-octadecylphosphonic acid, and a 4nm aluminium oxide layer, forming a 6nm dielectric layer in total.

The floating gate is made of aluminium and its surface is oxidised to form the inner dielectric aluminium oxide layer. An aluminium control gate exists between the PEN and the floating gate transistor. An organic semiconductor made of pentacene is also used.

The Tokyo OFMT needes an applied charge of 6 volts applied to the dielectric to affect the polarity of the floating gate inside it, whereas other organic flash projects require 20 - 30 volts. Reading the setting of the floating gate requires a 1 volt charge. Apparently up to a 1,000 write-erase cycles have been demonstrated.

This is a prototype project which proves a concept. Its charge retention time is around 24 hours, which is not long enough at all, contrasting poorly with the months and years duration of silicon-based NAND flash. However, the researchers think that this can be extended by making the transistors smaller and extending the molecular length of the SAM. ®