Highlights of space exploration missions in the year 2010. 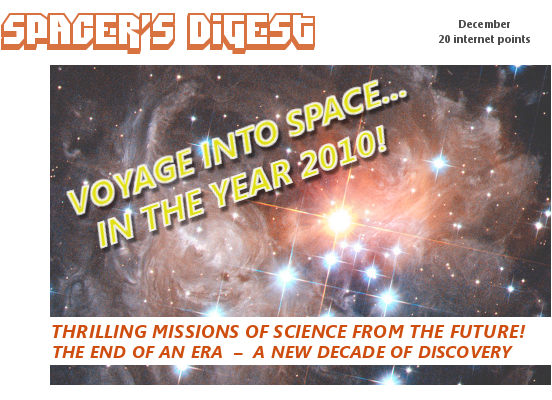 The year 2010 is shaping up to be a watershed in space exploration. The biggest change will doubtlessly come after America's planned retirement of its venerable space shuttle fleet next September in favor of the Constellation program (a program that's far behind schedule, by the by, and trapped somewhere in budgetary limbo).

But policy shifts are far from the only thing to look for in 2010. Among other missions, the ISS will attempt to uncover the secrets of antimatter, a non-profit will send a spacecraft sailing on beams of light, and Japan will provide us with an unprecedented look at weather beneath the clouds of Venus. Here's the complete list of the sweet, sweet space science you can look forward to digesting in the year ahead. Or thereabouts.

The Solar Dynamics Observatory (SDO) seeks to unravel the many mysteries surrounding the Sun's highs and lows, and their effects on Earth and space weather.

The ebb and flow of solar activity can have a major impact down on Earth. During the Maunder Minimum — a solar lull spanning roughly from 1645 to 1715 — Europe and North America were subject to bitterly cold winters and very short summers in what later came to be known as the Little Ice Age. During maximums, solar magnetic activity can bring satellites out of orbit and shut down power grids. In short, the sun is a big stinking deal 'round these parts. Better to keep a close eye on it.

SDO will measure the properties of the Sun and solar activities by employing three sophisticated instruments. The Helioseismic and Magnetic Imager (HMI) will map the surface of the Sun's magnetic fields and the plasma flows that generate it. The Extreme Ultraviolet Variability Experiment (EVE) will measure how much energy the sun emits at extreme ultraviolet wavelengths that are blocked out by the Earth's atmosphere but can affect satellites and astronauts in space. The Atmospheric Imaging Assembly (AIA) will snap full-disk shots of the Sun's atmosphere at a pace of once every 10 seconds. The previous best rate of full-disk images of the Sun was once every three minutes.

SDO will be collecting data at an enormous rate. According to NASA, the spacecraft will produce enough data to fill a single CD every 36 seconds as it watches the Sun almost 24 hours a day on a figure-eight orbit with Earth. SDO is designed to fly for five years, but may continue operating years after its initial mission life.