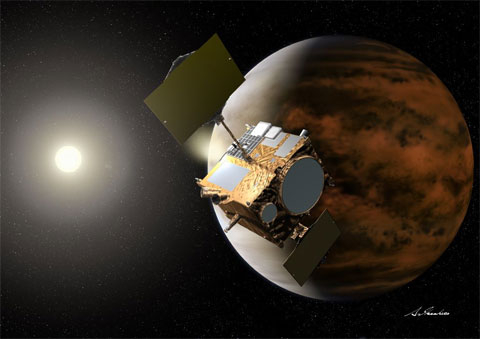 Formerly known as Planet-C, the spacecraft is planned to enter the orbit of Venus about a half a year after launch. It will serve about two years as the world's first interplanetary weather satellite.

Akatsuki's probe vehicle will enter an elliptical orbit that spans between 300 and 80,000 km away from the planet's surface. This wide variation will allow for unprecedented observations of the Venusian surface and the atmospheric particles escaping into space.

JAXA says it hopes swooping close to Venus will allow the probe to take photos of the surface and to observe the planet's storm winds that reach up to 100m per second.

Akatsuki will use infrared light to observe the atmosphere hiding under the planet's opaque layer of highly reflect clouds composed of sulfuric acid.

The mission also intends to confirm the presence of active volcanoes and thunder that's been suggested by earlier unmanned missions to the planet.


Although the space shuttle fleet had previously been scheduled for retirement after STS-133, nerd rage over having to cancel nifty new ISS components to meet the deadline caused the US to pony up funding for one extra mission. 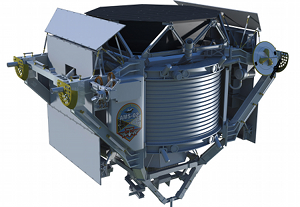 STS-134's primary payload will be the Alpha Magnetic Spectrometer (also called AMS-02), one of the gizmos whose early retirement most upset the howling boffins.

AMS-02 is a state-of-the-art particle physics detector being constructed and operated by an international team of 56 institutes spanning 16 countries under the auspices of the United States Department of Energy. The device is looking for antimatter and dark matter. Although dark matter is thought to add up to 95 per cent of the total mass known to exist, the exact nature of the stuff is unknown. As for antimatter: All evidence points to the universe being made out of matter. But in order for the Big Bang theory to work, the universe would require equal amounts of matter and antimatter. Whether or not there is significant amount of antimatter is one of the fundamental questions to understanding the origins of the universe.

STS-133 is the last planned mission of NASA's space shuttle program, which began service in 1981. Discovery and its crew of six will deliver critical spare components to the International Space Station on an MPLM (see above) and an exPRESS Logistics Carrier, an unpressurized payload container.

The mission will be the 134th shuttle flight and the 36th shuttle mission to the station.

Though greenhouse gases are usually fingered as the big nasty in any global climate change debate, a significant amount of Arctic warming may be influenced by tiny airborne particles called aerosols.

Some aerosols, like black carbon from traffic exhaust, can cause warming by absorbing sunlight. Others, like sulfates from coal power plants, may cause cooling by reflecting solar radiation. Some aerosols like natural dust particles may even play a role — although it's not exactly clear how. Aerosols are largely still a big fat mystery when it comes to climate change. That's where Glory floats in. 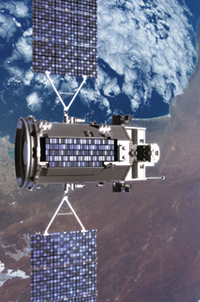 Glory above us, Image courtesy NASA

NASA's Glory satellite seeks to measure the distribution, properties, and chemical composition of both natural and human-produced aerosols and clouds to help understand their direct and indirect effects on climate.

Glory carries three instruments to get the job done. Its Aerosol Polarimetry Sensor (APS) is a continuous scanning sensor that collects visible, near infrared, and short-wave infrared data scattered from aerosols and clouds to distinguish the various properties and types of aerosols. Glory's Total Solar Irradiance (TIM) instrument is designed to measure the absorption and reflection of solar radiation by the Earth's atmosphere and determine the global average temperature. The spacecraft also sports a cloud camera to determine if measurements are being done on clear or cloud-filled areas, because clouds can have a significant impact on the quality of measurements.

According to Glory mission project manager, Bryan Fafaul, the most important goal of Glory is to help understand whether temperature increases and climate changes from aerosols are by-products of natural events or man-made sources.

Glory is slated to launch no earlier than October 1, 2010. Fafaul said there are currently no significant technical issues threatening the readiness of the mission.

LightSail-1 is an extremely odd spacecraft developed by the non-profit organization The Planetary Society to demonstrate that pressure from sunlight alone can propel a craft in Earth's orbit.

When light from the sun reflects off the surface of the space craft's solar sail, the energy and momentum of photons are transferred to the sail, and it pushes the craft through space. While the acceleration is slight, it is continuous and requires no fuel. In theory, it will also move faster than a chemical engine over time.

The Society launched a similar solar sailer, Cosmos 1, in June 2005, but the craft was lost when its launch rocket failed shortly after liftoff from a Russian submarine.

Now the ambitious project has returned in the form of the smaller LightSail-1 following an anonymous $1m donation to the Planetary Society. LightSail-1 seeks to prove the concept will work in orbit and two future missions over the course of several years hope to reach farther into space.

The next hurdle the mission needs to overcome is getting LightSail-1 into space. The Planetary Society plans to have the spacecraft ready for launch by the end of 2010, but its actual date of departure will depend on which launch vehicles are available to take on a secondary payload. According to the organization, it has identified several candidate American and Russian launches and hopes to make arrangements for a piggyback rocket ride early in 2010. ®