Noted US boffins have stated that habitable conditions in far-flung star systems may be more commonly found on moons in orbit around planets than on the planets themselves. This of course suggests that space travel may be very common elsewhere in the galaxy, among aliens who are not unfortunate enough - like the human race - to live in a star system with only one habitable body. 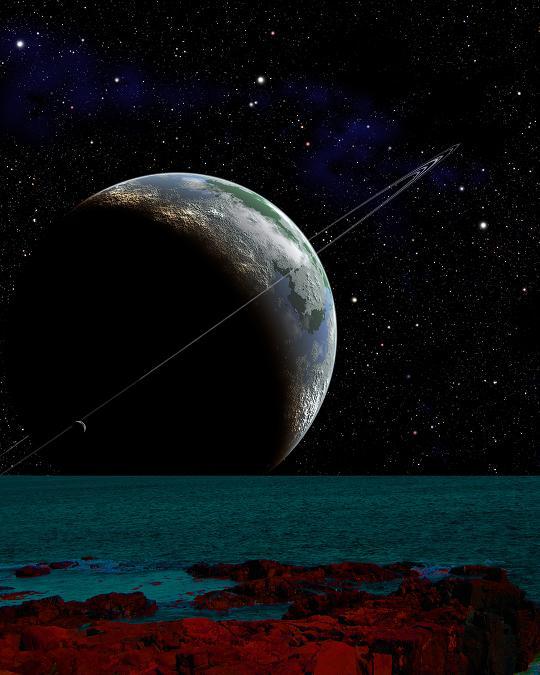 The moon men longed to invade and plunder their super-Earth ringed primary, but knew their spindly purplish bodies would never stand up to 7G.

"Alien moons orbiting gas giant planets may be more likely to be habitable than tidally locked Earth-sized planets or super-Earths," says Lisa Kaltenegger of the Harvard-Smithsonian Center for Astrophysics. "We should certainly keep them in mind as we work toward the ultimate goal of finding alien life."

The search for habitable worlds orbiting other suns requires the use of a powerful space telescope - for instance the James Webb Space Telescope (JWST) which NASA intends sending up to replace the Hubble - which is used to spot a "transit" when such a world passes in front of its parent star. Such a transit is more easily seen (when speaking of Earth-sized bodies) in the case of a world orbiting quite near the star, meaning that it's easier to spot worlds where liquid water could exist orbiting dimmer, less powerful stars.

But a full-blown planet orbiting a dim star close enough to be decently, life-bearingly warm would most probably be "tidally locked" like Mercury, with one face always turned toward the sun and the other eternally dark. Thus, Kaltenegger theorises that such worlds would be only marginally habitable.

When dealing with bigger, hotter suns like our own, it's easier to detect massive gas-giant planets like our own Jupiter or Saturn. Once such a planet is found, it's then possible to determine whether or not it has moons. If the gas-planet sat within its star's habitable zone, one or more of its moons might be of Earthly size - and habitable. Though tidally locked with respect to the gas-planet, the moons would rotate with respect to the local sun, so getting evenly-distributed sunlight and heat.

"All of the gas giant planets in our solar system have rocky and icy moons," says Kaltenegger. "That raises the possibility that alien Jupiters will also have moons. Some of those may be Earth-sized and able to hold onto an atmosphere."

It might even be possible in some circumstances to have habitable moon(s) orbiting a habitable "super-Earth," a massive rocky planet much bigger than ours.

All these exo-moon possibilities raise the prospect of alien star systems containing more than one habitable body. If such a situation had existed here in the Solar System, there would have been an immense spur to human space-travel efforts; furthermore, journeys among moons of a single planet would be far easier to achieve than true interplanetary journeys.

It doesn't seem unreasonable to speculate that any intelligent aliens inhabiting such a multi-habitat solar system would progress much faster than us in space travel. If life on exo-moons is actually more common in the universe than life on planets proper, as Kaltenegger suggests, it seems at least possible that space travel - and with it space trade, warfare etc. - is also widespread.

Humanity may need to rise above its circumstances if we're not to be hopelessly outclassed by the multifarious moon-man civilisations out there.

Kaltenegger has written a paper on the subject, Characterizing Habitable Exo-Moons, which may be read here. ®

The Center for Astrophysics people naturally went with an Avatar reference in discussing this, as the new flick is set on a habitable moon. We ourselves prefer the "forest moon of Endor" pop-culture nod when discussing exomoonology.