Traffic reports for the wrong country? There's an iPhone app for that

It's central London and it's time to go home. So you just fire up Navigon MobileNavigator before you go, to check Traffic Live for potential bottlenecks. Hmm, looks like there's congestion around the port of Dunkerque, so we'd best rule out that short cut to Hackney via Dover and Lille. 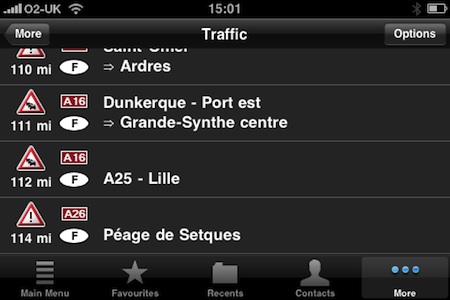 But on the other hand, there are no alerts anywhere nearer, which means there doesn't seem to be any traffic anywhere at all in London, so you could just… Or perhaps not. 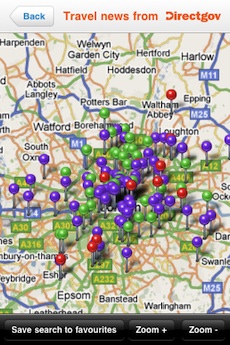 A double-check with Directgov's UK Travel News, unveiled earlier this month, reveals that London's road network is, as usual, a nightmare load of balls, multi-coloured ones...

There's something funny going here, and I appear to have those wrong-country satnav traffic reports blues. This, presumably, is an unexpected feature of Navigon's registration process, triggered by an unusual - but not impossible - set of circumstances.

In this particular case, I bought MobileNavigator Europe, which comes with maps for the whole of the continent, and obviously I'd be particularly cheesed-off if I'd only bought the UK version and was getting traffic messages from a country I didn't even have maps for. But I'm in France quite often, so maps for at least two countries are useful. Which is my problem - that I'm in France quite often.

You buy MobileNavigator from the App Store, but the Traffic Live add-on is an in-app sale, which comes in different versions for different countries, depending on which one you're in. Or not. Or something.

I'd bought MobileNavigator from the UK app store, the only one I have an account for, and I'd been in London when I bought the Traffic Live add-on. But I'd been in France the day before, and once I'd fired up Navigon and met the perplexing traffic alerts from the Pas de Calais, I checked Google Maps in the iPhone and found, yes, the place where I'd last checked Google Maps on the iPhone… in France.

Refreshing the phone's GPS does nothing to refresh the French registration, which is sort of understandable, but sort of not understandable as well. Obviously Navigon is going to be wanting to sell you traffic reports for when you're visiting other countries, and doesn't want you to be getting the lot for the price of one. But, in the Navigon iPhone app there seems to me to be no obvious mechanism for either running more than one country's traffic reports at the same time, or for deleting the one you're running and buying a second. In which case you can't buy more than one anyway.

Navigon's response to queries has, for the past couple of weeks, been largely pulse-free. No response to the email to support, no response to the one to the head of PR, and although the press office does actually answer the phone and says they'll get somebody to follow it up, nobody does. Three weeks into the deal I'm still getting Calais traffic reports, and apparently nobody at Navigon cares/believes me.

So I try an experiment. What if I delete Navigon from the iPhone and reinstall it, thus triggering a re-download of Traffic Live? I try this, and when I attempt to repurchase Traffic Live, I'm told I've already bought it, so there's no charge. So they have a record of the purchase, which is good.

And bad. They also appear to have a record of the country of registration, so the Calais reports are back… ®