Existence of 'Sea of Krakens' on Titan confirmed

International boffins are chuffed as ninepence this week to announce that they have confirmed the existence of the "Sea of Krakens", a 150,000-square-mile* lake of liquefied patio gas near the north pole of Titan, ice moon of Saturn. 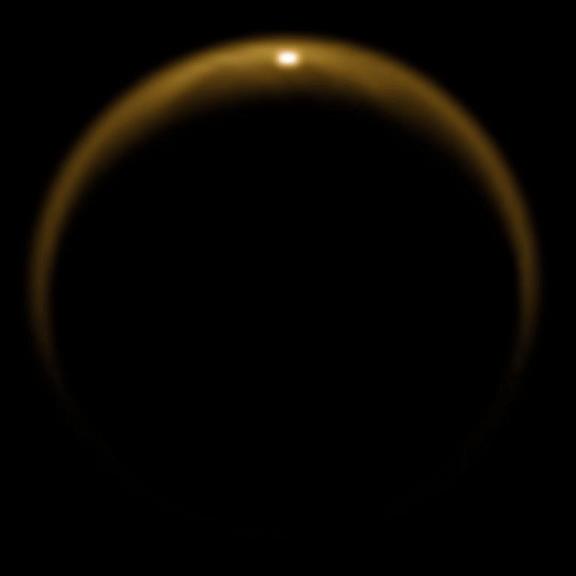 Sunlight glinting from the Sea of Krakens in the Titanian arctic.

It was fairly certain that the Sea of Krakens (or Kraken Mare, in boffinry lingo) existed, as space-probe radar images had shown a large, very flat area at that location. However the Cassini spacecraft in orbit around Saturn has now snapped a pic showing sunlight glinting from the huge liquid-methane sea, confirming its existence beyond doubt.

The first boffin to spot the glint in the pic was Katrin Stephan of the Deutsches Zentrum für Luft- und Raumfahrt (DLR, the German space agency), working as part of the international Cassini team. This was actually back in July, but there was plenty of checking to do before all was certain.

"I was instantly excited because the glint reminded me of an image of our own planet taken from orbit around Earth, showing a reflection of sunlight on an ocean," says Stephan. "But we also had to do more work to make sure the glint we were seeing wasn't lightning or an erupting volcano."

Similar glints were seen last year from the smaller lakes at Titan's south pole, but the much bigger seas of the ice moon's arctic region had to wait until July, when the approaching equinox brought spring sunlight to the north pole.

"This one image communicates so much about Titan - thick atmosphere, surface lakes and an otherworldliness," says Bob Pappalardo, a Cassini brainbox at NASA's Jet Propulsion Lab. "It's an unsettling combination of strangeness yet similarity to Earth. This picture is one of Cassini's iconic images."

The bracing -180°C temperatures prevalent on Titan mean that water ice acts more the way rock does here on Earth, and the liquids filling the seas and lakes are hydrocarbons which would be gaseous here - methane, ethane and such - though of course we humans like to liquefy and store them under pressure to run our barbecues, patio heaters etc. Just as water does here, however, the patio-gas seas evaporate when conditions are favourable to form clouds and fog, which subsequently rain down as LPG elsewhere. Earth and Titan are thus the only bodies in the solar system with surface geology moulded by movements of liquid.

"These results remind us how unique Titan is in the solar system," says Ralf Jaumann of the DLR. "But they also show us that liquid has a universal power to shape geological surfaces in the same way, no matter what the liquid is."

There are already plans to send out a small nuclear-powered robot sailboat to cruise the freezing patio-gas seas of the Titanian arctic. The Titan Mare Explorer (TiME), if approved for funding, might lift off in 2016 and splash down into the Sea of Krakens or the nearby, ice-island-studded Ligeian in 2022. ®

*About 26,000 times as big as Lake Windermere. Or, for traditionalists, one would need nineteen countries the size of Wales to cover the same area.

Also, for anyone wondering why the whole of Titan doesn't catch fire, explode etc, there is of course no free oxygen in the atmosphere there for all the patio-gas to burn with, as we have here on Earth.

Suckers for punishment, we added a crawler transporter to our Saturn V

Doing lockdown with bags and bags of Chinese plastic bricks