Two thousand nine Anno Domini was a magical year for US technology patent applications. For each spin around old Sol we're consistently stunned by what major companies claim to have invented - but we dare say the bounty from this year will forever hold a special place in our hearts. (For another week or two, anyway. We've got priorities.)

While plenty of extremely questionable tech patents make it through the US Patent and Trademark Office approval process, a true insight into the horrors that await us comes from looking at patent applications. Herein lies the limbo where a company's mad machinations crash against the leaky dike that's the USPTO.

El Reg is always eager to lap up the sad, eerie, and unusual of the bunch as they fall into our sights. We've gathered up a few of our 2009 favorites published in honor of the year's end. Enjoy and despair.

Year after year, Big Blue tops the annual list of most patent-happy American tech companies. Which is saying a lot.

Judging by some of its applications, we reckon IBM employees have a major problem with being forced to attend endless waves of boring workday meetings. And either they're going to great pains to liven them up, or some of their patent filings are actually coded messages to the outside world for help.

[Note to IBM engineers: Shh, don't say anything. Just write "enhancement process" three times on your ridiculous patent if chief executive Palmisano has trapped you inside a conference room. We'll contact the authorities.]

The solution - as we're sure brighter minds have already surmised with cold, pure logic - is accomplished through injecting silly sound effects into the conversation. Always appropriate. WAKKA WAKKA HOOOOONK. 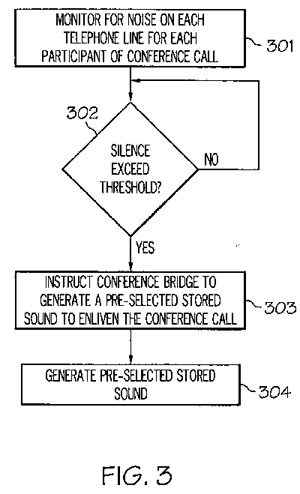 The IBM device would use noise detectors to screen phone lines during a conference call for pre-determined periods of silence. When a conversational pause reaches an appropriate level of awkwardness, a novelty noise (such as laughs, cheers, farts, or whistles) would be played to the rollicking amusement of one and all. We can see it now:

"It is with great regret that I must tell you our company must lay off approximately 5,000 employees in order to avoid severe financial hardship."

"Damn it, who turned that….? Ahem, we have explored all our options and unfortunately…"

Our next piece of evidence is an IBM patent application seeking to eliminate the scourge of society's reliance on arranging business meetings based on "arbitrary hour-based scheduling paradigm." (And you probably didn't even know that a unit of measurement was oppressing you.)

According to the patent: "Meeting attendees will fill the full hour for which the meeting is scheduled regardless of whether the entire hour is necessary to address the business at hand. The result of this is that a meeting that could have taken less than an hour will end up wasting time due to the arbitrary hour-based scheduling paradigm."

What's a company to do? Schedule 45-minute meetings instead? Hold fewer meetings? Tell executives not to waste everyone's time? No! Time itself must be redefined!

"The observation is that if an hour were shorter, by a small amount, we would be more focused, and accomplish the same amount of work, but in less real time, thereby increasing productivity," the patent application states.

'Christ on a cracker!' you say. 'Has IBM invented a time-compression device?' Alas, no. What we have here is a company trying to claim it has invented scheduling meetings based on non-standard time intervals. And here we thought the minute hand of a watch could do that.

Next page: Fig. 2: Apple apparel: for cultists by cultists
Page: