...and one hot mystery

Although the quintet revealed by Kepler are all much larger than Earth and far too hot to harbor any life known to science, NASA said the discoveries validate the mission and indicate the telescope will meet its scientific goals as it ramps up to find smaller planets located within the habitable zone of distant stars.

The five exoplanets range in size from that of Neptune to larger than Jupiter, according to NASA, and they have estimated temperatures ranging from 2,200 to 3,000 degrees Fahrenheit (roughly 1204-1648 Celsius) - hotter than molten lava. NASA presented the discoveries Monday at a meeting of the American Astronomical Society in Washington.

The Kepler mission also shows the universe still has plenty of tricks up its sleeves for astronomers. For example, Kepler found celestial objects that are hotter than the host stars they orbit. NASA said the objects are too hot to be planets and the wrong size and density to fit any known profile of a dwarf star. The science team said it isn't sure what the objects could be — but plan to analyze them going forward.

Kepler's newly-spotted planets - dubbed Kepler 4b, 5b, 6b, 7b, and 8b - have some interesting properties of their own as well. Kepler 4b has the same density of the the ice giants in our solar system (Uranus and Neptune), but orbits extremely close to its host star. The other four are gas giants similar in size to Jupiter but have lower densities than standard theories of how planets form. William Borucki, who leads the mission from NASA's Ames Research Center in California, said Kepler 7b has about the same density as Styrofoam. 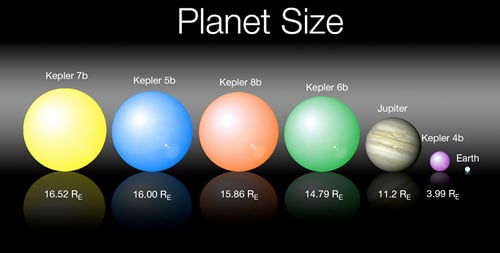 "It's gratifying to see the first Kepler discoveries rolling off the assembly line," said Jon Morse, director of the Astrophysics Division at NASA Headquarters in Washington said in a statement. "We expected Jupiter-size planets in short orbits to be the first planets Kepler could detect. It's only a matter of time before more Kepler observations lead to smaller planets with longer period orbits, coming closer and closer to the discovery of the first Earth analog."

The discoveries are based on approximately six weeks worth of data collected since Kepler science operations began on May 12, 2009. The space telescope will continue to search the skies for Earth-like planets until at least November 2012.

Kepler detects the presence of exoplanets by watching for small dips in the brightness of stars when an orbiting planet transits in front (from Kepler's field of view). The size of planets can be estimated from measuring the size of the dip, and their temperatures by the type of star it orbits and the planet's orbital period. NASA hopes to find Earth-sized planets that could harbor liquid water — essential for life as we know it — by searching within the Goldilocks zone between it being too close or too far away from the host star.

NASA said because it requires three transits to verify an Earth-size planet and because the only habitable orbit we know of takes one year, it's expected to take at least three years before it locates and confirms potential real estate for any ETs out there. ®