If the statistics collected and massaged by the Semiconductor Industry Association (SIA) are any guide, it looks like the recession is over. Today, the SIA released its report for chip sales in November and said that revenues hit $22.6bn for the month, which is 8.5 per cent more than the sales level set a year ago ($20.9bn). This represents the first real growth on an annual basis in a long time.

Of course, the comparison to the prior November is a relatively easy one. This time last year, SIA said that chip sales in November 2008 were down 9.6 per cent, to $20.8bn, from the $23.1bn level set in November 2007. (The SIA has subsequently revised its November 2008 numbers upwards by $100m since last year, and that's not a typo.)

(Warning: there is some mathemagic in these numbers, given that SIA uses a three-month moving average to come up with its monthly figures).

Here are the trend lines for monthly revenues and growth rates from the SIA since January 1996. 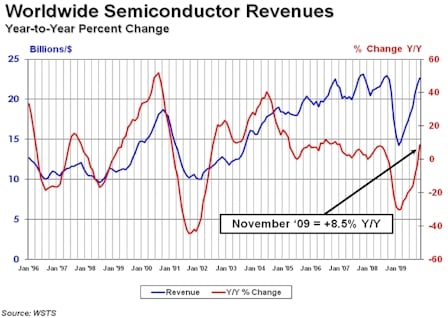 As you can see, the peak growth rates for chip sales were very high during the dot-com, ERP, and Y2K booms, and the collapse, in terms of declines, were just as steep as the chip industry just lived through last year. However, more things use chips today than a decade ago, and chip revenues have continued a relatively steady climb over the past decade, excepting the very abrupt collapse at the end of 2008.

The question now is will the growth in chip sales continue, pushing sales above the $20bn to $22bn levels of 2006 through 2008 or will the industry just stagger along now that it is returning to what has seemed normal at the end of the 2000s.

"For the first time in 2009, worldwide semiconductor sales in November were in positive territory compared to one year ago," explained George Scalise, SIA's president, in a statement accompanying the figures. Scalise was referring to three-month sequential rolling averages that pitted the July through August 2009 period against the September through November 2009 period.

"2009 ended with sales of many IT and consumer products faring better than earlier projections," he said. "Sales of personal computers continue to strengthen in line with recent projections and appear to signal the beginning of recovery of demand from the business sector. The release of the Windows 7 operating system in October has been a positive factor. Unit sales of handsets should come in roughly even with 2008 levels. In the consumer space, there have been a few bright spots including LCD TVs, which saw an increase of 25 to 30 percent in units in 2009."

Scalise added that November 2009 was the ninth consecutive month of chip revenue increases and that in November, all geographic regions saw growth. Using the three-month rolling average, chip sales in the Americas region rose by 25.9 per cent, to $3.88bn, and the Asia/Pacific region had 12.8 percent growth year-on-year, to $11.92bn. However, on an annual basis, both Europe and Japan saw declines. Chip sales in Europe were down 4.9 per cent, to $3.02bn, and fell in Japan by 5.3 per cent, to $3.84bn, in November 2009 on a year-on-year basis. ®