This coup brought to you by XSS

Spain's prime minister was briefly ousted from that country's official website after hackers replaced his likeness with that of bumbling slapstick character Mr. Bean.

Representatives for Prime Minister Jose Luis Rodriguez Zapatero confirmed the defacement of www.eu2010.es but insisted data on the site was never compromised, the BBC reported. Instead, the stunt was done using cross-site scripting attack, which injects unauthorized content and code into vulnerable websites.

People who tried to visit the PM's site site were briefly met by an image of Mr. Bean actor Rowan Atkinson. Comparisons between the appearance of Spain's leader and the buffoon have been a long-standing joke.

While the hack was relatively harmless XSS, or cross-site scripting holes can be exploited to inject malicious code into visitors' browsers that steal authentication credentials or redirect victims to malicious websites. 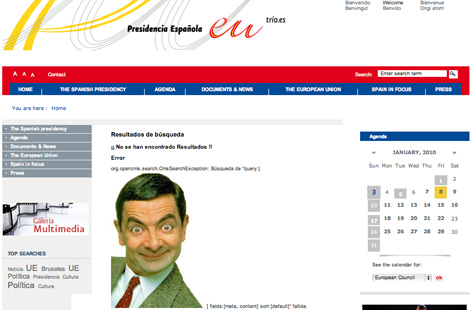 More from the BBC and Reuters are here and here. ®