Seagate has upped its BlackArmor external drive interface from USB 2.0 to the faster USB 3.0.

A steady USB interface changeover is underway as the 5Gbit/s SuperSpeed USB 3 interface colonises the external drive interface landscape. LaCie and and others have already announced product and both Western Digital and Seagate have revealed similar plans in time for CES in Las Vegas. 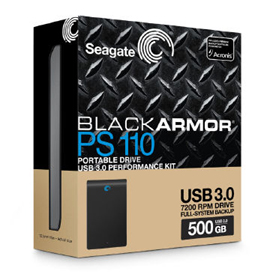 Seagate's BlackArmor PS110 is a 500GB unit with a - presumed - 2-platter, 2.5-inch Constellation hard drive spinning at 7,200rpm and a 3Gbit/s SATA interface inside it. WD's USB 3.0 My Book uses the same SATA drive interface. The PS110 comes with a USB 3.0 Performance Kit: essentially a PC Express card and cables. This bypasses the lack of an installed base of USB 3.0 desktop and notebook PCs.

Seagate says we should expect data transfer speeds up to three times faster than a USB 2.0 external drive, and says it has reached this speed in real-world testing. It quotes sustained 100MB/sec transfer speeds, which will happily shorten backup and large file transfer times. The company claims a "25GB HD movie can be transferred in 4.2 minutes versus the 13.9 minutes it would take using a traditional USB 2.0 drive."

The PS110 USB 3.0 product comes with Acronis backup software - an automated full-system backup routine - plus a bare-metal recovery facility called SafetyDrill+. The product is compatible with Windows XP, Vista and 7 and can be bought from Seagate.com in the US for a manufacturer’s suggested retail price of $179.99. ®

Disks down overall and SSDs slide

Jingle bells, disk drives sell not so well from today. Oh what fun it is to ride on a one-horse open array...

In brief Third of market to evaporate by 2021. Only nearline, spycam drives to swell