Blu-ray capacity to increase by a third

Blu-ray disk capacity can increase by a third because of enhanced signal processing and a new way to evaluate media quality.

Current Blu-ray disks store 25GB per layer and this can increase to 33.4GB through the use of Partial Response Maximum Likelihood (PRML) signal processing, which doesn't need any change to the existing Blu-ray laser optical system. The Tech-On newsletter reports that media quality evaluation could no longer be carried out using a jitter-based method, though. There is a relationship between error rate and jitter rate which is used in evaluating 25GB/layer media, but this relationship fails with higher-density media. 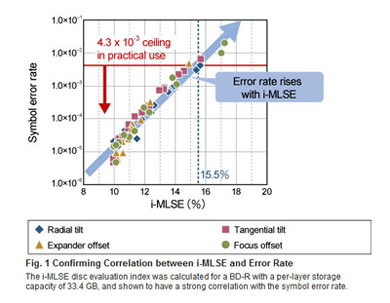 Panasonic and Sony have developed a new way of evaluating media called the i-MLSE (Maximum Likelihood Sequence Estimation) evaluation index. There is a strong correlation between the media error rate and the i-MLSE index at the 33.4GB density level. Sony is reported as believing that it will be relatively straightforward to estimate the read error rate for 33.4GB Blu-ray media using i-MLSE. Although the calculation is complex, recent hardware can run the calculations in real time, as is done with jitter-based evaluation methods.

Existing Blu-ray players and burners would need, it's said, a firmware update to deal with any forthcoming 33.4GB Blu-ray media.

Sony is proposing that the Blu-ray Disc Association endorses the adoption of i-MLSE and hopes that it will become a standard. The increased capacity of Blu-ray media will help with the storage demands of 3D movies such as Avatar. Sony is planning a line of 3D televisions, which ties in with the whole idea that 3D technology will strengthen sales of high-definition televisions, disks and media drives.

For example, it has announced the BDV-HZ970W home theatre system at CES, which includes an integrated 3D Blu-ray player. It has also announced a standalone 3D Blu-ray player, the BDP-S770, which should be available in the summer. It will probably require a new HDMI cable to connect to a new 3D-capable high definition TV.

We might estimate that 2011 would be the year for the start of any significant adoption by consumers of 3D-capable Blu-ray. This is because of the need for a 3D Blu-ray disk standard, the purchase of 3D-capable TVs, and the availability of a sufficient number of 3D movies on Blu-ray disks.

Separately, Blu-ray disk manufacturer Ritek, based in Taiwan, which had a manufacturing capacity of 2m disks per month in December, says that if demand growth continues it will increase that to 4m or even 6m per month this year. ®