Windows Mobile 7.0 due on LG phones this year

LG is reported to have told the Consumer Electronics Show (CES) in Las Vegas, Nevada, it will ship phones running Windows Mobile 7 and 6.5 this year.

Gizmodo reported LG saying Microsoft supposed-iPhone challenging touch-and-gesture based Windows 7 will ship on its eXpo smartphone and projector and the Snapdragon. You can see the report below, or read Gizmodo's full coverage from the event here. 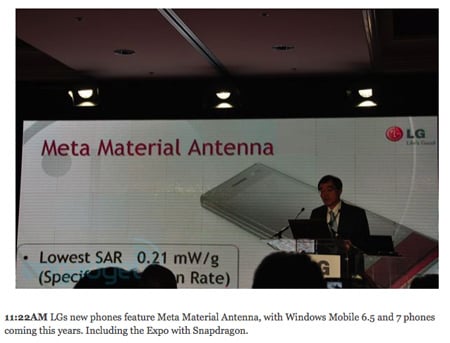 UX blogger Stephen Chapman last May wrote, based on a leaked slide from Microsoft partner Commentor, Windows Mobile 7.0 would be released in November 2009 with devices due April 2010.

This suggests Windows Mobile 7.0 next month.

"We will have a lot more to say about phones next month at Mobile World Congress," Ballmer said.

A Microsoft spokesperson refused comment on the dates, saying simply the company works "closely" with LG. ®