Firefox 3.6: I am more than my Monkey

The last time Mozilla released a new incarnation of its open-source Firefox browser, the main concern was the JavaScript engine. This time around, the open-sourcers have far more on the brain.

Due as early as next week, Firefox 3.6 hardly ignores JavaScript performance. Mozilla claims a full 20 per cent boost on the SunSpider benchmark. But the new Firefox also seeks to juice performance beyond JavaScript and - perhaps more importantly - expand the arsenal of tools packed into the browser proper.

"This is really a different type of release for us," Mike Beltzner, Mozilla's director of Firefox development, tells The Reg. "Firefox 3.6 is going back to that idea of trying to get a bunch of new web technology into the hands of users so that web developers can take advantage of it sooner."

According to Beltzner, this was the original intention when Mozilla began work on Firefox 3.1 - the project that would eventually morph into Firefox 3.5 before making its official debut in June of last year. But after Google unveiled its Googasmic Chrome browser, with its much-lauded V8 JavaScript engine, Beltzner and crew focused that much more attention on TraceMonkey, their own effort to rev JavaScript speeds. Firefox 3.5 became the TraceMonkey browser.

"But it's not the only place where there are opportunities for speed to increase. As all the [browser] competitors start to move within the same sort of order of magnitude of speed there, you need to find other places where you need to focus, like how quickly the browser manipulates the document object model or how quickly it draws the graphics. And there's a whole lot you can do in terms of prioritization."

With Firefox 3.6, for instance, if you load multiple tabs at the same time, it gives precedence to the tab on top. "We actually prioritize the network traffic for the tab that's currently in the foreground, because that's the one you're looking at. The ones in the background can take a little longer."

According to Beltzer, the new release also improves the browser's start-up times, its page rendering, and the general "responsiveness" of its UI. The Firefox "Awesome Bar" - a means of quickly returning to websites you've visited in the past - now caches content, so it no longer reads to disk every time you touch it. "We're improving speed in areas we don't have an industry benchmark for," Beltzner says. 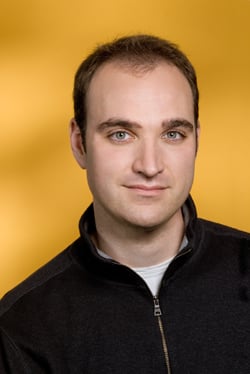 Not that speed is the be all and end all. The bigger message from Beltzner is that the new release puts more tools in the hands of developers. This includes the Web Open Font Format (a faster means of taping downloadable fonts), CSS gradients (for displaying smooth transitions between web-based colors), the HTML5 Drag and Drop API (for seamlessly moving files from the OS into the browser proper), the File API (for manipulating files), and full-screen HTML5 video.

The eventual aim of so many of these tools is a web free from browser plug-ins. With the Web Open Font Format, for instance, Mozilla hopes to do away with PDFs. "Everything you can do with a PDF, you should be able to do with a web page," Beltzner says.

You should. But in the meantime, Beltzner's team have also worked to shore-up all those plug-ins we still can't do without. Firefox 3.6 automatically detects outdated plug-ins - and requires the installation of new ones. Mozilla hasn't forgotten about tools for the here-and-now - the most conspicuous addition to the new browser is "Personas," a way of customizing the look of your Firefox - but first and foremost, 3.6 is a release for developers.

More than 1.2 million people are already using 3.6 as a beta, and this past weekend, Mozilla squeezed out its first release candidate. As the QA group runs another round of tests, Beltzner expects to officially launch mid to late next week or early the week after. "Definitely by the end of this month," he says. ®

What didn't make the cut? As Betlzner and crew struggled to get the browser out within six months - a goal they didn't quite meet - support for scalable vector graphics, some SMIL XML-based animation libraries, and a new HTML5 parser were left for later versions. The not-ready-for-prime-time parser is actually included in the release, but it's turned off by default.

But Beltzner's most difficult decision was the exclusion of the tab preview widget for Windows 7. "We were having trouble getting the APIs in Windows 7 to work the way we expected," he said, so it's also turned off by default. If you'd like to help, the bug is here.