China's doomed attempt to hold the world to ransom

Or why your job won't be following the rare earth trail

The Chinese government is trying to corner the rare earths market and that isn't good news for the tech business. Those with good memories of Chemistry O Level will know what the rare earths are: the funny little line of elements from Lanthanum to Lutetium at the bottom of the periodic table, along with Yttrium and Scandium, which we usually add to the list.

The reason we like them in the tech business is because they're what enables us to make a lot of this tech stuff that is the business. You can't run fibre optic cables without your Erbium repeaters, Europium, Terbium and Yttrium are all used to make the coloured dots in CRTs, the lens on your camera phone is 25 per cent Lanthanum oxide (yes, really, glass is made of metal oxides) and without Neodimium and Dysprosium we'd not have permanent magnets: no hard drives nor iPod headphones.

Those last two we could make out of Samarium, but that's another rare earth, and in the absence of that we'd have to go back to AlNiCo which is what PDP 11 drives used. 20 kilos for a few megabytes of storage and a right bugger to plug in your ear.

The reason we like the rare earths so much for all of these things is that while they're all chemically very similar, they have very different reactions to things like light, electricity and magnetism. For example, Lutetium is magneto-electric, meaning that a change in a magnetic field will produce a change in current: just as piezo-electric materials produce a change in response to a change in mechanical stress.

That is very useful if you want to convert changes in a magnetic field into variations in current, which you can then use to drive a cathode ray tube. We do that in an MRI machine, which is why at the heart of one is a great big Lutetium oxide crystal. Your fact of the day is that of around 2,200 kg of lutetium used globally a year, 2,000 kg is used at one factory in Texas to make those crystals.

As you would predict, given very similar chemistries you never actually find these elements alone. They're always all there in varying proportions. Minerals like Monazite and Bentonite are the usual sources but to get just the Lutetium out, for example, you end up having to purify them all out. 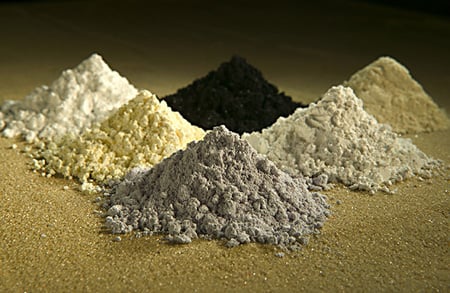 In fact, this is how some of the rarer ones were discovered in the first place. Bash up your ore in acid and pour it into a long column of crushed stone (think calcium carbonate here). As the different elements have different atomic weights, they will go further down the column and, by chance, they also have different colours at this stage. You end up with something that looks like a straw made of rock with different colour bands in it. Each band is one of the rare earths.

The longer you make your column the more bands you'll get: big wide ones for relatively common elements like Yttrium and Lanthanum, very narrow ones for rarities like Lutetium. The last few rare earths were found by doing exactly this - making the columns longer and counting the number of coloured bands. Now chop up your straw along the dividing lines and dissolve away the rock and you've successfully separated them all.

Next page: Rare Earths - Actually, they're not that rare...
Page: