After Microsoft confirmed that a hole in its Internet Explorer browser was used in the December cyber attacks on Google and at least 33 other outfits, a trio of security-conscious nations - Germany, France, and Australia - went so far as to warn their citizens against the use of IE. And that led to a very good week for the likes of Opera and Mozilla.

Following an IE warning from the German government, Opera saw German downloads of its desktop browser more than double. And in Australia, where a similar warning was issued, its downloads leaped 37 per cent.

Meanwhile, Mozilla saw a "statistically significant rise" in the number of downloads originating from both Germany and France, the third nation to warn against the use of IE. In the chart below - supplied by Mozilla - the orange area shows an estimated 300,000 extra downloads in Germany over the past four days: 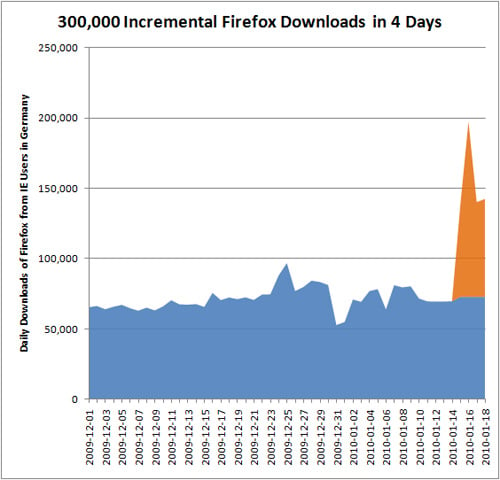 According to a Mozilla spokeswoman, the outfit has also seen an uptick in website traffic from France, but she says the added traffic will take another day to two to register with the outfit's download stats. An Opera spokesman tells us that unlike Mozilla, his company has not seen a significant download uptick from the French.

Google declined to provide recent Chrome download stats for such countries, suggesting we check with third-party research firms at the end of the month.

"Given the significant level of attention this issue has generated, confusion about what customers can do to protect themselves and the escalating threat environment Microsoft will release a security update out-of-band for this vulnerability," George Stathakopoulos, the general manager of the company's Trustworthy Computing Security group, said in a blog post Tuesday morning.

"We take the decision to go out-of-band very seriously given the impact to customers, but we believe releasing an update out-of-band update is the right decision at this time."

Microsoft says that attacks against the vuln are only effective on Internet Explorer 6 and that such attacks have been "very limited." But independent research says that IE 7 and 8 can also be exploited.

Opera was quite clear on how it sees the matter: "Security issues continue to plague Internet Explorer users, and the latest recommendations from the German and French governments against using the browser are in line with what the security experts have been saying for years." ®