iSlate leaves fingerprints all over the net

It's a big iPhone

Apple's iSlate has been spotted online by Flurry Analytics, sporting an iPhone OS and consumerist tendencies.

More than 50 instances of what Flurry calls "Apple's rumoured tablet device" have turned up in the company's records gleaned from application downloads, indicating that the device to be announced on Wednesday is iPhone compatible and that Cupertino-based testers are more interested in games than word processors.

Flurry gathers its data using an engine developers drop into their applications in exchange for a share of the data. That engine reports back to Flurry when the applications are executed, sharing data on the hardware on which its been installed as well as the frequency with which it's run and other information of interest to developers.

On the company blog Flurry reports that 50 instances of tablet devices have been spotted downloading more than 200 applications, with the emphasis on games and media consumption rather than business apps: 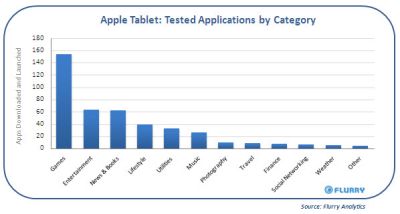 Flurry won't say exactly how it knew that the devices weren't new iPhone versions, other than the fact that when their engine asks for the hardware model "iPhone" is not the response, and that the OS version reported (3.2) is not used on any iPhone. Flurry also reports having seen OS version 4 running on iPhones both in Cupertino and elsewhere.

Those factors, coupled with the fact that all the reports can be traced, by IP address, to Apple's Cupertino campus, are enough to convince Flurry and sound pretty compelling to us.

Apparently the Flurry engine doesn't ask for screen resolution, which is a shame but understandable for an iPhone application. So all we can really say is that Apple's tablet will run iPhone applications and make use of iTunes, which shouldn't come as any surprise.

Either that, or Apple is going out of its way to confuse us. ®