Chinese tourist bosses in Hunan Province have jumped energetically onto the Avatar bandwagon by renaming a peak in honour of the paradigm-busting sci-fi epic.

Earlier this week, the South Pillar of Heaven (南天一柱, in case you're wondering), located in the Zhangjiajie "Scenic Spot", officially became "Hallelujah Mountain" - a nod to the movie's floating rock masses which were in part inspired by the World Natural Heritage site. 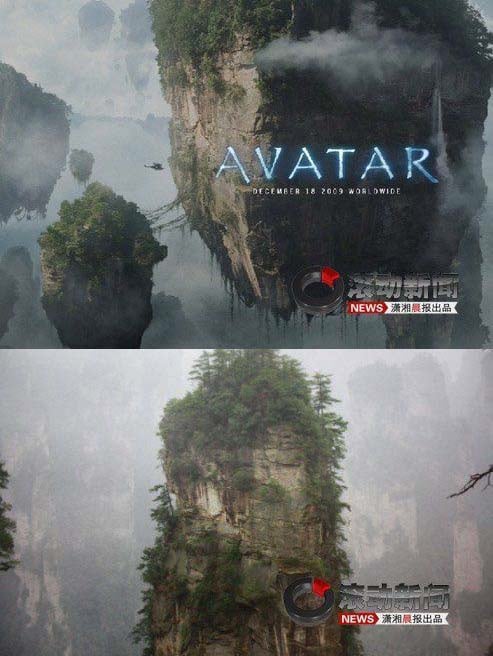 The Zhangjiajie Scenic Spot Administration's director, Song Zhiguang, is evidently aware of the suicidal despair provoked in some cinemagoers by the realisation that they'll never be able to visit Pandora, since he told Xinhua news agency: "Pandora is a long way but Zhangjiajie is close. Tourists are welcome to the 'Miracle tour of Avatar's floating mountains.'"

Song insisted: "We are simply trying to be accommodating to people's wishes. Zhangjiajie is the world's natural heritage. Its gorgeous beauty doesn't belong only to the Chinese people, it also belongs to the whole world. By changing the name from South Pillar of the Heaven to Hallelujah Mountain, we are sending a message: Zhangjiejie doesn't only belong to the world, it embraces the world!"

Whether the powers that be embrace the rebranding with as much enthusiasm remains to be seen. The Chinese authorities recently "banned" Avatar amid concerns it might provoke civil unrest, after local audiences drew a parallel between the plight of the Na'vi and their own rough treatment at the hand of property developers.

Accordingly, censors ordered the film be shown only in 3D, effectively restricting its distribution to the limited number of facilities equipped to project in this format. ®