World continues to revolve around sun

Updated Steve Jobs has announced Apple's long-awaited tablet - now officially named the iPad, as The Reg had predicted - at a media circus Wednesday morning in the 757-seat Novellus Theater at San Francisco's Yerba Buena Center for the Arts.

The Reg will offer its considered analysis of what Jobs called "a truly magical and revolutionary product" later today, but first a few iPad details, hot from Steve's lips and courtesy of The New York Times. 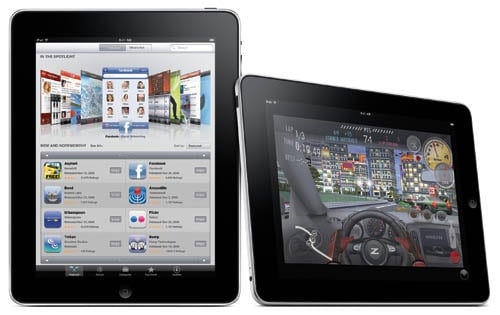 As expected, the iPad's raison d'être, according to Jobs, is to be a mobile video-watching, book-reading, game-playing, photo-perusing, music-listening, web-surfing, and email-emailing device. It looks like a big, half-inch-thick, 1.5-pound iPhone - although with a more rectangular aspect ratio - even down to the single circular button below the display.

Its 9.7-inch display is significantly bigger than the seven-incher that some pundits had predicted. You can customize the iPad's desktop images - if a term such as "desktop" is not too passé for the ultra-mobile 21st century. Like the iPhone and countless other handhelds, the iPad works in both portrait and landscape modes.

The iPad still uses Google Maps and Google Earth - rumors of any impending Google-Apple breakup will have to wait until later to come to fruition. It runs on what Jobs referred to as Apple's custom silicon, and has 16GB, 32GB or 64GB of flash, and 802.11n WiFi and Bluetooth. It will also be available with 3G connectivity.

According to Apple's iPhone software guru, Scott Forstall, the iPad will run "virtually all" iPhone software "virtually unmodified," either in an iPhone-sized area in the center of the iPad's display or blown up to fit the display. Developers will be able to update their iPhone apps to iPaddishness through an enhanced version of the iPhone SDK, to be released today.

The "artsy" look-and-feel of the event's invitation, which featured splashes and blobs of color, is apparently explained by the iPad's "brushes" feature, which allows you to paint on photos, change their colors, and make images of your own.

David Carr of The New York Times made an interesting observation during the iPad demo: "One of the weird things about the presentation is how it is really all about the software," he writes. "The gadget itself is transparent, a window into software."

An iPad-specific app, iBooks (what else..?), and its accompanying online store is being supported by publishers Penguin, Harper Collins, Simon & Schuster, and Macmillan and Hachette to deliver books based on the popular ePub format. No mention of McGraw-Hill - although that may simply be a bit of spankies because their CEO leaked iPad news yesterday. Apple doesn't like leaks.

Apple has developed a version of its productivity suite, iWork, for the iPad, incorporating gesture-based interface elements. iWork consists of Pages, a word-processor-cum-page-layout app; Numbers, a simple spreadsheet; and Keynote, a full-featured presentation app.

3G connectivity is optional. Although all iPads will ship unlocked, Apple has what Jobs called "a breakthrough deal" with AT&T (GSM) in the US - not Verizon (CDMA), which had been rumored - that will allow up to 250MB of data per month for $14.99 and unlimited data for $29.99. There will, however, be no contract required. International deals will be available beginning in June.

Pricing begins at $499 - that'll get you a non-3G iPad with 16GB of storage. A 32GB version costs $599, and a 64GB version, $699. Want 3G? That'll be $130 more. The non-3G models will ship in two months; the 3G versions will take an additional month. In addition to a charging dock, a keyboard-equipped dock will also be available for those users who don't want to be limited to the multi-touch display's soft keyboard, although pricing wasn't provided. ®

Update: This story was continually updated with more details as they became available.