An ex-Microsoft employee has let the cat out of the bag about when the software giant might release Windows 8.

MSFTKitchen reports that in early December last year, Chris Green wrote a post on his MSDN blog, which appeared to reveal that Microsoft might-possibly-maybe release the next iteration of its operating system in July 2011, perhaps.

Meanwhile, he also suggested that Windows Server 2012 (presumably based on the same Windows 8 tech) and Office 2012 would be shipped in July 2012.

Of course, the MS developer - who has since moved on from Redmond - was one lonely voice in the Microsoft machine. So the dates should be taken with a very large dose of white flaky sea salt crystals.

Importantly, he did slap big fat question marks at the end of each suggested new release.

If the estimated roadmap is correct, however, then Microsoft may be attempting to speed up the frequency of its OS updates. That’s a suggestion that many Windows customers might balk at, given Redmond’s tendency to miss its self-imposed deadlines. 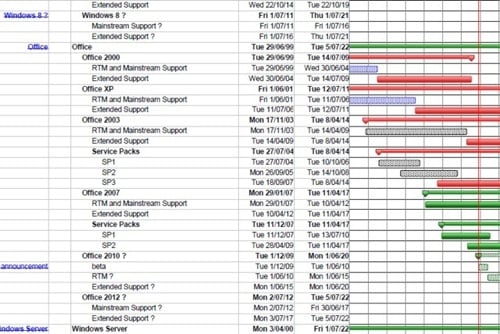 Is you is, or is you ain't, my software roadmap baby?

All of this could be interpreted as a company running scared of the competition. After all, Mountain View wonks are currently adding some spit and polish to their own take on the operating system - Google Chrome OS, which may rock up at some point this year.

Then there’s Apple, which yesterday announced its iPadded cell. But Microsoft for its part hasn’t gone on record and officially confirmed roadmap dates yet.

Still, a big hint that MS execs might soon have something to say about Windows 8 did bob its head above the water earlier this week. The company has already setup a URL for its Engineering Windows 8 blog, but the content is yet "to be determined". ®