Oh, and there's that Canadian bra

Updated In addition to ignoring support for Adobe Flash, multitasking, and a few other niceties in its new iPad, Apple seems to have ignored one other important detail: it doesn't own the name "iPad." Fujitsu says it does.

"It's our understanding that the name is ours," Fujitsu's PR director Masahiro Yamane told The New York Times on Thursday. 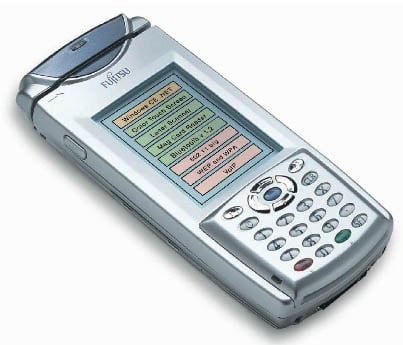 The iPad: sleek, touchscreen-equipped, mobile - and from Fujitsu

Like the Apple iPad, the Fujitsu iPad (PDF) - which has been around since 2002 - is a mobile device with a touchscreen display. Fujisu's model, however, is part of that company's point-of-sale retail offerings.

And Fujitsu isn't the only iPad maker out there. Magtek also manufactures its own iPad encrypted credit-card swiper, Seimens uses the name iPad in conjunction with its engines and motors, and a Canadian company even offers a breast-enhancing iPad bra - and trust us, we scoured the web for an image of that product, but to no avail.

According to the NYT, Magtek's iPad threw a spanner into the trademarking of Fujitsu's iPad, leading to its abandonment of its trademarking effort in early 2007. Fujitsu did, however, resubmit that application in June.

In July, says the NYT, Apple "used a proxy to apply for an international trademark for the iPad," has since submitted multiple requests for additional time to contest Fujitsu's application, and has until the end of next month to decide whether it will formally contest Fujitsu's right to the name "iPad."

No word on whether Canada's Coconut Grove Pads will enter the trademark battle, but since its products are substantially different from Fujitsu's, Magtek's, or Apple's, we believe that any such effort would be a bust.

We do, however, note one aspect of the Fujitsu iPad that might stick in Cupertino's craw. According to the Japanese iPad's spec sheet, it comes "equipped with Microsoft Windows CE .NET operating system." ®

From Reg reader David Smith comes a spate of other iPads that Apple might want to be aware of: a Chinese defibrillator ("Saef and relaible design"), a pre-fab home by a New Zealand architect, a proposed residential tower in Dubai, BeOS's Internet Personal Access Device, the "world's most hacker-proof operating system," a commercial-kitchen Bump Bar Unit ("designed for harsh kitchen environments"), and a memo-taking iPhone and iPod touch app that's available, of all places, in Apple's own online App Store.