Updated IBM reseachers have made a breakthrough in the development of ultra-high-speed transistor design, creating a 100GHz graphene-based wafer-scale device. And that's just for starters.

The transistor that the researchers have developed is a relatively large one, with a gate length of 240 nanometers - speeds should increase as the gate length shrinks.

The field-effect transistor that the IBM team developed exploits what a paper published in the journal Science understates as the "very high carrier mobilities" of graphene, a one-atom-thick sheet of carbon atoms grown on a silicon substrate. 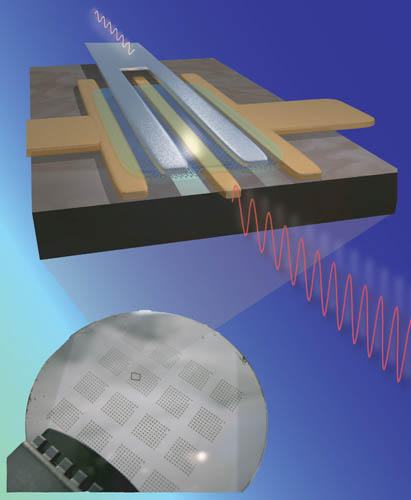 Graphene has been known for some time to have exceptional electron mobility, but it has remained stubbornly resistant to the creation of band gaps - the electron-free zones necessary for transistors to funtion as on/off switches. Among the IBM research team's breakthroughs was the creation of these band gaps in a graphene-based transistor.

In an IBM Research statement, Dr. T.C. Chen, vice president for science and technology, said: "A key advantage of graphene lies in the very high speeds in which electrons propagate, which is essential for achieving high-speed, high-performance next generation transistors. The breakthrough we are announcing demonstrates clearly that graphene can be utilized to produce high performance devices and integrated circuits."

Key to the breakthrough is what the paper calls a "interfacial polymer layer" that separates the graphene sheet from its metal gate dialectric. And although the gate length is a hefty 240nm, IBM notes that there is "plenty of space for further optimization of its performance by scaling down the gate length."

But even at this gate length and at this early stage of their development, IBM's graphene transistors can already achieve speeds of 250 per cent of those achievable by "state-of-the-art" silicon metal-oxide semiconductor FETs of the same gate length, which the IBM paper says top out at around 40GHz.

Also notable is the fact that the graphene transistor's 100GHz performance was at room temperature. When chilled, even higher performance is to be expected. ®

This article did not note that the cut-off frequency, or switching speed, of an individual transistor is faster than the clock rate of a microprocessor composed of such transistors, which is typically an order of magnitude or more lower. The Reg regrets the lack of clarity.