NASA has cancelled today's planned lift-off of its Solar Dynamics Observatory due to unfavourable wind conditions at Cape Canaveral.

When it does finally get off the ground, hopefully tomorrow, SDO's "unprecedented mission will study the Sun and its dynamic behavior". Over five years, it will "determine how the Sun’s magnetic field is generated, structured, and converted into violent solar events like turbulent solar wind, solar flares, and Coronal Mass Ejections".

This, the agency elaborates, will enhance our understanding of "space weather", and allow us to "accommodate or mitigate" the effects of solar activity, which can include knocking out satellites, affecting power grids and disrupting television and telecoms systems. 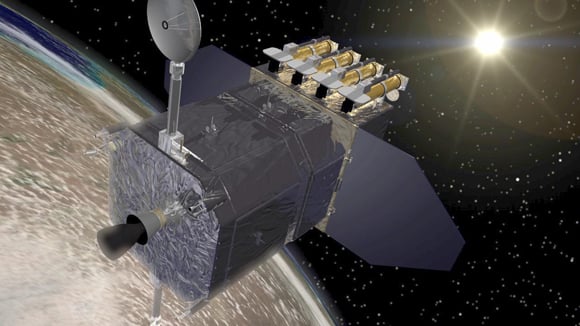 AIA is tasked with grabbing hi-res pics of "different layers in the sun’s atmosphere to further understand how changing solar magnetic fields release the energy that heats the solar corona and creates flares".

It will "snap a full disk image in 8 wavelengths every 10 seconds" at a resolution of 4096 x 4096 px, or "almost IMAX quality", using four telescopes each capable of discerning detail as small as 725 km.

EVE is designed to gauge the sun’s extreme ultraviolet (EUV) brightness as often as "every ten seconds", and will provide space weather forecasters with "warnings of communications and navigation outages" provoked by sudden EUV surges.

The collected data will be dispatched to a dedicated ground station at New Mexico's White Sands Complex at a rate of roughly 1.5 terabytes a day, the equivalent of "downloading half a million songs each day", NASA helpfully explains.

SDO will operate in an inclined geosynchronous orbit at the "outer edges of Earth's radiation belt", around 36,000 km out. The orbit allows "nearly continuous, high data-rate contact" with the ground station, but will involve two annual "Earth shadow" eclipses, of 2-3 weeks each, and "three lunar shadow events each year", the agency notes.