A Twittering satnav - what could possibly go wrong? The next version of Navigon's MobileNavigator iPhone app, 1.5.0, will feature both Twitter and Facebook integration, allowing you to alert you friends, family and millions of fans with your whereabouts, destination and estimated time of arrival.

This might be helpful for the punctual and truthful among us, but consider this, everybody else - MobileNavigator will be sending these people the pure, unvarnished truth about where you really are, and when you really left. Plus it's an iPhone app with a pedestrian navigation option, so you don't need to be in a car for it to work, and if you phone to say you're on the train, the coordinates of Spearmint Rhino are going to be a dead giveaway. Not that you have time to go to Spearmint Rhino anyway, now it's telling people when you ought to arrive. 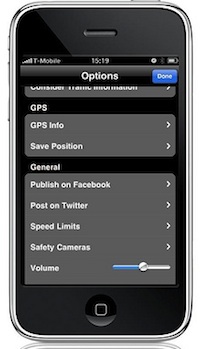 In addition to Facebook and Twitter integration, 1.5.0 will include a personal route planner, and a 3D map enhancement, Panorama View3D, will be available as a €9.99 in-app purchase. Navigon also says it's running a price promotion on the European version of MobileNavigator until the end of February, cutting the price to €74.99 instead of €99.99, and the Traffic Live in-app purchase from €24.99 to €14.99. Bafflingly, The Register's European version still seems to want to charge us, um, $18.99 for the latter. And yes, that is dollars. Version 1.5.0 is due to be submitted to the App Store at the end of next month, says Navigon.

Bafflenote Just before Christmas we drew attention to Traffic Live's helpful alerts about congestion in the Pas de Calais. After much pestering we got Navigon to confirm that this was nothing to do with GPS-based registration, and entirely to do with Navigon not having actually shipped a UK version of Traffic Live yet. Further pestering failed to reveal why they were selling it on the UK anyway. Whatever, Navigon finally did ship UK Traffic Live last week, and now we look at the mess that is London, we rather pine for the uncongested plains of Picardy… ®