The Men on the Flying Trapeze

The ships were intended for long-duration operations over the Pacific Ocean, and during such cruises the Sparrowhawk fighters had their wheeled undercarriages taken off, relying solely on their skyhooks and achieving reduced drag and better performance. The hook-on manoeuvre was said to be a knack: once a pilot knew how to do it, it was easier than landing on a normal carrier. Certainly the pilots of the airship Heavier-Than-Air Units (aka "the men on the flying trapeze") had a far better safety record than their wet-navy counterparts, with a perfect recovery record. 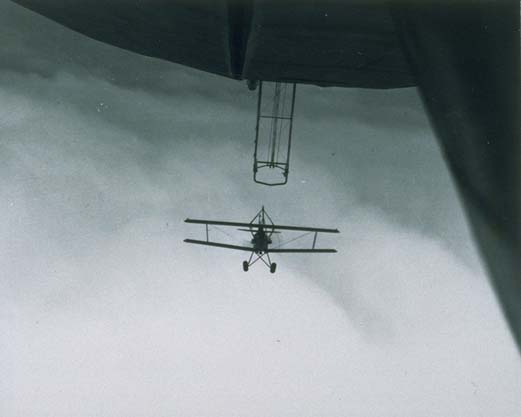 Forget Battlestar Galactica, Captain Scarlet and those lads, this was the real deal

The flying aircraft carriers and other US military dirigibles enjoyed the privilege of inflating their lift cells with non-flammable helium, when other nations' ships had to use dangerous hydrogen. The USA at the time controlled almost the entire world supply of bulk helium, found in exploitable amounts in certain natural-gas fields in and around Texas. The US government later went on to establish a vast stockpile of the gas in a vast underground rock dome formation, which still exists today - though no longer primarily for use in airships.

The Macon was originally based at the Lakehurst naval air station in New Jersey - now the site of a protoype electromagnetic mass-driver catapult intended for ordinary aircraft carriers - but in 1933 she was transferred to the famous Moffett Field in Silicon Valley, today home to NASA's Ames facility.

She joined in exercises with the US Pacific fleet on several occasions, gradually learning how to deploy her aircraft in a scouting screen and get them back again afterward. It was often claimed that she had been "shot down" by aircraft of the opposing side; on other occasions the Macon's own fighters beat off such attacks.