Historians have finally revealed what they reckon is the definitive site of the Battle of Bosworth - the 22 August 1485 scrap in which Henry Tudor's army defeated Richard III's forces.

As history records, Richard himself led a direct charge against Henry, but was driven back into marshy ground where "he and his heavily armoured knights were picked off by Welshmen with halberds and daggers", as the Times puts it.

Quite where Richard met his end was lost in the mists of time, but now a "groundbreaking archaeological survey" has relocated the battle some two miles southwest of Ambion Hill, which for years served as the best-guess site of the showdown, and is home to the Bosworth Battlefield Heritage Centre and Country Park.

The hunt for Bosworth Field was led by the Battlefields Trust, which unearthed vital evidence to back its claim, including round shot and fragments of armour. Archaeologist Dr Glenn Foard admitted that there "may be relatively few finds from the battle", but described several of the objects as "amazing".

He elaborated: "The most important by far is the silver-gilt boar, which was Richard III’s own badge, given in large numbers to his supporters. But this one is special, because it is silver-gilt. It was almost certainly worn by a knight in King Richard’s own retinue who rode with the King to his death in his last desperate cavalry charge. It was found right next to the site of a small medieval marsh - and the King was killed when his horse became stuck in a mire."

The battlefield, Foard revealed, "straddles the Roman road known as the Fenn Lane, near Fenn Lane Farm", about a mile to the northwest of the village of Stoke Golding. The farm can be seen here (.kmz), slightly to left of centre in this Google Earth grab: 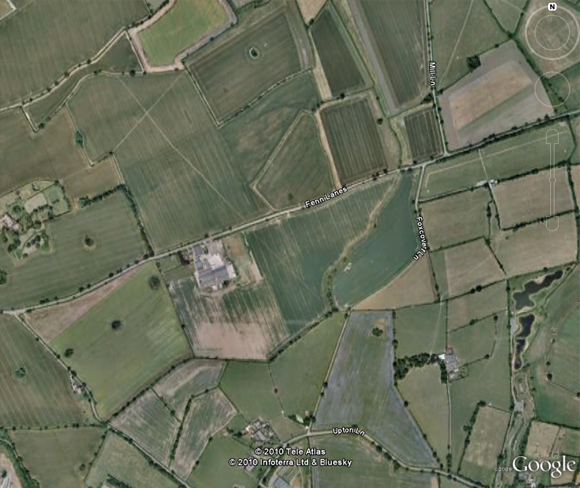 Leicestershire County Council announced the battle had been pinpointed last October, but kept it under wraps until now to prevent unwanted visitors. It's now negotiating with landowners to gain full public access to the area, while Bosworth Battlefield Heritage Centre told the BBC that since it's "within walking distance" of the real Battle of Bosworth, it won't have to up sticks to where Richard III really came unstuck.

The Times has more on the announcement here, and the Beeb has a snap of the boar badge and a video report from a rather uninspiring snow-covered field here. ®