In a post to the YouTube help pages, the Mountain View Chocolate Factory indicates that when visiting YouTube, netizens using an "old web browser" are now seeing an interstitial warning that they will soon have to upgrade if they want to take advantage of new features on the site..

"On March 13, we are dropping support for your browser. You'll still be able to watch videos after that date, but new features may not work properly," the screen reads, before pointing users to the latest versions of the five major browsers: Google Chrome 4, Opera 10, Internet Explorer 8, Safari 4, and Firefox 3.6. 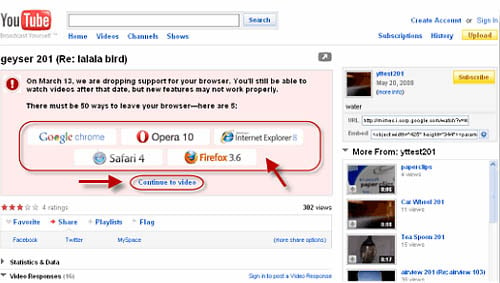 In this case, an "old browser" means any release before IE7, Firefox 3.0, Chrome 4.0, or Safari 3.0. Google says it began notifying users in the middle of last year that it would soon remove support for such aging browsers, but it appears that the company is now giving a specific date for the change. Google has not yet responded to a request to confirm the March 13 change.

Earlier this month, Google said it would remove "older browser" support from Google Docs and Google Sites on March 1 and that Gmail and Calendar would follow suit by the end of the year.

These moves come in the wake of revelations that alleged Chinese hackers pilfered intellectual property from Google via a vulnerability in IE6 sometime last year. But earlier this month, a Google spokesman said the changes to Docs, Sites, Calendar, and Gmail were not motivated by the attacks.

"This was already planned and is being done so we can continue using the latest web technologies to bring new, innovative features to our users," he said. "We're following other companies that have done the same, like Twitter, Facebook and Microsoft for Office Web Apps." ®

A tip of the hat to Ars Technica for spotting Google's post.

Google has responded. It did not explicitly confirm the March 13 date, but it did say: "Users will still be able to watch YouTube on IE6. As the Web evolves, our goal is to keep up by making YouTube a richer, faster, and more dynamic experience for everyone."