Samuel Martin Martin, 27, racked up some impressive expenditure during his one year-tenure as spiritual shepherd to the villages of Totanes and Noez, in Toledo. As well as relieving pious parishioners of their hard-earned cash - including that from a whip-round in aid of Haiti, according to one flabbergasted local interviewed last night on Spanish telly - Martin also offered his sexual services online at €120 a pop. 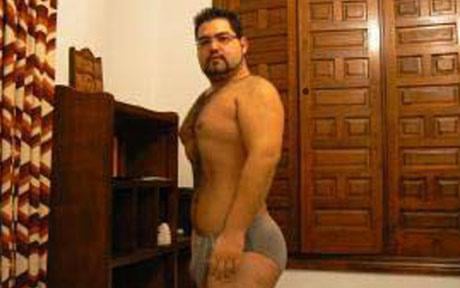 Posing as "Hector" (see pic), he punted himself in a net ad which read: "Heterosexual man for women and couples. Real photos. Well hung (15cm) to give you pleasure and happiness."

It continued: "I am open to everything except sadism. Hotels and private addresses. 24 hours. You won't regret it, I will give you pleasure like never before."

Martin finally confessed all to his congregation at Sunday mass, confirming local whispers that all was not well with the church finances.

The Archbishop of Toledo has now relieved the sinner of his priestly responsibilities, while the bish's representatives asked worshippers to forgive Martin because he was evidently "ill". ®