'It's not rocket science'

Jones initially stated that the methods were published in the scientific papers, “there’s no rocket science in them”. He can’t have thanked his boss Acton for butting in to say that CRU was “not a national archive” and had no obligation to preserve the raw temperature data.

Willis, who’d earlier given Lord Lawson and Benny Piesar of the Global Warming Policy Foundation a withering roasting, wasn’t impressed. “We can’t understand why you wouldn’t want to,” he complained.

“We are longing to publish it,” claimed Acton, a bit too unctuously. 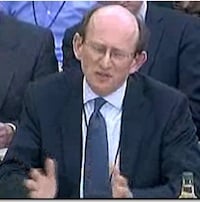 “It isn’t traditionally done,” replied Jones. Stringer continued, quoting Jones' email to Warwick Hughes, famous before Climategate broke, refusing to give data. Jones had said, "Why should I make the data available when your aim is to find something wrong with it?"

Stringer said scientists make their reputations by proving or disproving what other scientists have done. He forced Jones to admit that contrary to his initial statement, the code wasn’t available for independent scientists to test the work. So how can science progress, Stringer wondered.

Jones admitted he had “obviously written some very awful emails”. Stringer said science “shouldn’t have to rely on an individual request for other scientists to get the data”.

Previously sympathetic MPs were beginning to be more hostile. One asked why it was so unusual for somebody to replicate Jones' work from scratch. Jones said that during the peer review process, nobody had ever asked for raw data or methodology.

In the University’s written submission, Acton complained about bothersome sceptics making the work of his scientists more difficult – and wanted the leaker found. (And presumably strung up.)

In this, Stringer saw a comparison between the Expenses Scandal and Climategate.

“The Speaker lost his job because he thought it was more important to pursue people who’d leaked the expenses, than the issue, the way members had claimed expenses. Aren’t you going the same way,” he asked Acton, “prejudging the outcome of the enquiry?”

Acton said he hoped not. Stringer said Acton should be rejoicing at the publicity shed on his scientists' work.

Stringer felt the taxpayer was being cheated. The attitude seemed to put the scientists above ordinary scrutiny, and beyond questioning by the people who paid their wages. He mentioned that the US DoE part paid for CRU’s work. Jones replied they can go get the raw data elsewhere.

Acton didn’t help when he said UEA was “longing” to release the raw data. If that was true now, everyone knew it wasn’t true for years.

By this point Jones and Acton appear to have lost the sympathy of the Committee’s Chair, Willis.

What staggered him, he said, was Acton’s statement that the integrity of the UEA was the most important question. “Surely scientific integrity on the world's leading global question should be the question. Have you not miserably failed?” he asked.

It was a sign how differently the middle ground views climate scientists since the Climategate Affair broke.