US burg renames self 'Google'

What would you do for Gigabit internet?

Google is looking for US locations to test its own ultra-high-speed fibre optic networks, and there's no city more eager to be chosen than Google, Kansas.

Bill Bunten, mayor of the state capital formally known as Topeka, Kansas signed a proclamation on Monday temporarily renaming the city "Google" in an effort to convince the internet search giant to invest in its broadband infrastructure.

The Topeka Capital-Journal reports that the decree designates the city Google, Kansas — albeit unofficially — for the duration of March. Apparently, Topeka can't legally change it's name for such a short period of time with the intention of changing it back, according to the city attorney.

Google did ask US local governments to express their interest in becoming a test bed for Gigabit fiber internet, and you've got to admire the showmanship. 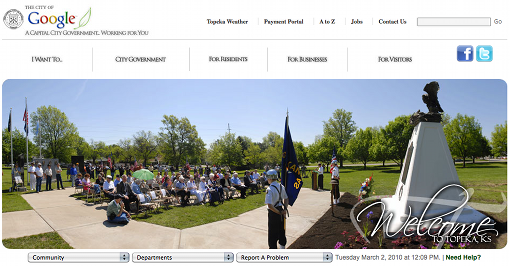 The 79-year-old mayor said he hopes the stunt would set the city apart from other burgs elbowing for Google's attention like Grand Rapids, Michigan and Baton Rouge, Louisiana.

Oddly enough, the name swap isn't without precedent. Back in 1998, Topeka's former mayor Joan Wagnon renamed the city ToPikachu to celebrate the US launch of Nintendo's Pokeman franchise. Pikachu is the name of the painfully adorable monster that serves as the figurehead of the Pokemon phenomenon.