Whatever happened to the email app?

How we all went off-message

Lab Notes Is the email program dead? Did the whole world just migrate away from Hotmail over to Facebook when we weren't looking? Does anyone else care?

Weirdly, the answer seems to be yes, yes, and no. Email has never gone away, and its advantages are unique: but the email client seems to be going the way of the Gopher.

Which is a bit odd when you consider how useful it still is. Nobody knows your email address unless you tell them, and messages are private by default. These are still the internet's universal protocols for private communication, something Web 2.0 types only grudgingly admit exists.

We have to be honest - managing your own POP3 or IMAP accounts always was a bit of a minority pastime. Notes and Outlook ruled the roost on corporate PCs. Most of the rest of the world - normal people - only ever used a webmail service as a primary email account.

Facebook offers them a pretty straightforward upgrade - with the illusion of privacy, no spam, and a pretty easy to use address book. Just don't tell Facebook investors that one day it might be as profitable as Hotmail... But for me and many of you I suspect, the choice of email client is something in which you make a bit of investment, and a careful decision.

And what a sorry landscape we have before us.

Eudora:
The emailer of choice for jelly babies

Mac users get a good email client bundled with the OS. It's not the fastest, or the lightest, but it has improved steadily over the years, taking advantage of system improvements such as better threading and search. It's now really, really good.

IMAP handling is excellent, which for me means both the client and server accurately reflect the state of your mailboxes, and do so efficiently, without excessive CPU or network load. Using Apple's MobileMe you can take your filters with you to a new installation. It's all so nice, I take it for granted. But that's the only bright spot in a landscape marked by major players leaving the scene.

On Windows, it's a bit pitiful. The choices of a good IMAP/POP client are diminishing. After rebranding Outlook Express as Vista Mail, Microsoft dropped the email client entirely from Windows 7. It's now available as a free download, and renamed again, to Windows Live Mail. After 18 years of great service, Eudora [history] gave up the ghost in 2006, with its replacement a fork of the Thunderbird codebase, which we were promised would be Eudora-ised.

Back in the day, Eudora was a superb email program, with one of the most honest and amusing changelogs in the business. Shortly after that, the sole author behind the venerable Pegasus Mail decided to jack it in. (Only to change his mind - see below.)

Today, there's the The Bat! - complete with inexplicable! exclamation! mark - which hails from Chisinau, in deepest Moldova. Where, presumably, bats deliver email (rather than winged horses).

The Bat! is very powerful indeed, a real power user's program, allowing you to fine tune IMAP communications. It comes with powerful views and filters and a few unique hallmark features, such as built-in message encryption and configuration portability. There's even a version that runs off a USB stick.

The drawback is that it can take all day to set up, it costs real money, and is as friendly as a Swiss Army Knife - enough to deter (perhaps unfairly) the more casual user. For anyone who ever telnet-ed to port 110 and typed list, the Bat! is for you.

The F/OSS alternative, Mozilla's Thunderbird, was for ages a spartan and neglected poor relative of the browser. Versions 1.x and 2.x each seemed to be stalled for years. Thunderbird was also handicapped by inheriting a toxic legacy: its predecessor was on the receiving end of one of the most damning critiques of programming ever written.

Jamie Zawinski had written the original Netscape email client and returned to the scene after the program had been open sourced. He's written several entertaining essays (sample: "my C version of this code was able to thread 10,000 messages in less than half a second on a low-end 90 MHz Pentium") but Groupware bad is a good introduction.

The Thunderbird team seemed to want "the community" to sprout lots of add-ons, as they had with Firefox, then noticed that they hadn't, and so finally decided to integrate the most-needed ones into the program itself. It was a good move, as Thunderbird is now actually quite good. It's striving to add sophisticated features (virtual folders, fast search, tabs) but doesn't seem to have got too bloated in doing so. The configuration UI remains clean and consistent. 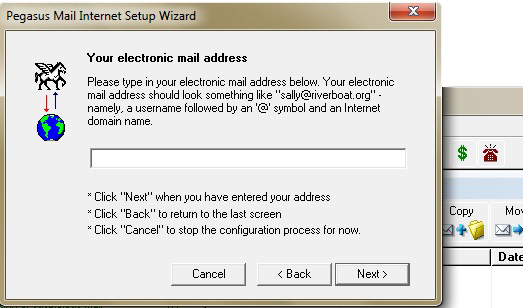 And then there's the prodigal email client, Pegasus. For many readers I'll bet this Netware client that predates dial-up accounts was your choice throughout the 1990s: Pegasus Mail. And it's still here, one man's burden. Two years ago the programmer responsible, David Harris, chucked it all in, only to change his mind. Verity Stob wrote a splendid account of Pegasus Mail that's better than any review. Well, Pegasus still survives. If you've used it this long, why move away?

And er, that's almost it. So Mac users are deliriously happy with Apple Mail, Linux users seem happy enough with Thunderbird (or a self-built version of pine or elm, perhaps) and Windows users struggle on with a bizarre choice of specialist apps, or Outlook Express/Vista Mail/Windows Live Mail.

Vista Mail:
Any colour toolbar you like - as long as it's turquoise