Garmin's Geko 201 GPS kit can't decide what year it is, flipping between decades every time it's switched on, though it's performing better on days of the week. 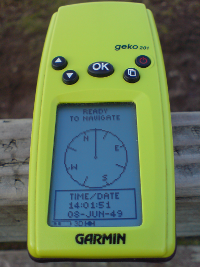 Thanks to Reg Reader Dazed for the piccy

2010 is proving a complicated year for computers, fouling up debit cards in New Zealand and credit cards in Germany, and now Garmin's Geko 201 GPS kit which has decided that it's 1949, or perhaps 1969 or even 2029.

The shift isn't by an exact number of days and seems to change every time the device is switched on, but it's causing problems with software designed to import GPS tracks for analysis. Apparently dates before 1990 aren't considered acceptable.

We've asked Garmin if there's a fix coming, but the company hasn't got back to us. Forum posts report being told that a fix is coming, and that it will be available to download, but not when it might arrive. Given the accuracy of dates coming out of Garmin that's probably no bad thing, but until it arrives its probably best to carry a watch too - one that displays the current year. ®

Y2K? It was all just a big bun-fight, according to one Reg reader

Y2K Are those currants compliant? WELL ARE THEY?

Y2K We'll pay anything, anything - just don't turn that phone off

Things I learned from Y2K (pt 87): How to swap a mainframe for Microsoft Access

Y2K The customers will never know what we did. Until now

Y2K Patched or not patched? You won't know until the box marked "2000" is opened

Two missing digits? How about two missing employees in today's story of Y2K