The NanoNote is a £90 portable computer, sporting open source hardware and software, but no wireless and little more than a Vi editor in the way of applications.

The device comes from Qi-Hardware and features a 3in colour screen, 2GB of Flash storage along with 32MB of Ram, but not much in the way of applications as it will boot into a Linux kernel featuring Vi and mutt. Connectivity is limited to a USB connection, though the presence of an SDIO slot means that could be expanded if anyone spent the time creating some drivers. 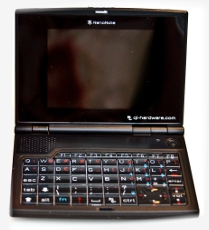 The device comes from various people involved in the OpenMoko project, and maintains that project's commitment to open source hardware and software - so all the code is open source, and the hardware schematics are released under a Creative Commons licence. Developers playing with the kit have already managed to get Doom and Quake running, and early versions of Qt have been demonstrated, so buyers who stump up the €99 for a device probably won't be limited to Vi for long.

Open source hardware has a somewhat patchy success rate - the IT industry is so dominated by patent-holding mega-corporations that any attempt to make a serious competitor can simply be eradicated with a lawyer's letter or two.

But as long as such devices don't threaten those companies then they can achieve limited success, and improvements in manufacturing are reducing the barriers to entry: QI-Hardware reckons it only needs to sell 3000 NanoNotes to make the business viable, which isn't very many even if the device lacks any killer application right now.

Some developing-world companies are looking at the NanoNote, but realistically it's more of a Linux-hacker's toy at the moment, albeit a pretty one that will run Quake. ®