Will fly itself down from orbit to runway landing

Long-delayed plans by the US to deploy a small robot space shuttle appear now to be approaching fruition, according to reports. The US Air Force has now stated that the X-37 unmanned spaceplane will be launched into orbit on April 19. 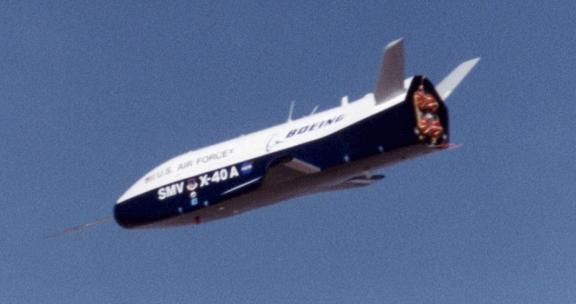 The X-37 began life as a NASA project, intended perhaps to lead to a manned "lifeboat" re-entry craft for the crew of the International Space Station (ISS). In the event NASA did little more than get the ball rolling, and the ISS lifeboat is actually an ordinary Russian Soyuz capsule.

But the X-37 project at Boeing carried on, passing from NASA into military hands and becoming a robotic spaceplane able to remain in orbit for substantial periods before re-entering the atmosphere and coming in for a runway landing automatically. It is now run by the US Air Force Rapid Capabilities Office, which at one point hoped to make the first space flight as early as 2008.

The X-37 has already flown in various in-atmosphere tests, sometimes being dropped from high in the stratosphere by the "White Knight" mothership used to carry the famous X-Prize-winning SpaceShipOne suborbital rocketplane on the first stage of its journeys. Reportedly the X-37 suffered some hiccups during these tests, on one occasion running off the end of the runway at Edwards Air Force Base in California.

Now, according to written answers supplied by the Air Force to Spaceflight Now, the X-37 has been shipped to Florida where it will be mounted atop an Atlas V launch rocket for despatch into orbit next month.

The airforce spokesmen aren't revealing anything more about the X-37's mission - not even the date for its return to Earth, far less anything regarding the payload. According to the Rapid Capabilities Office:

The X-37B has the requirement to be on-orbit up to 270 days. Actual length for the first mission will depend on the meeting the mission objectives, which consists of checkout and performance characteristics of the spacecraft systems.